My Decade of Blogging

Today marks the 10 year anniversary of my blog and its blog posts. This, I suspect, will be a super self indulgent post harking back to memories of how I did things, and my aspirations for the next decade.

Regardless of whether this post is of interest to you: thanks for stopping by and reading over all this time ❤

Although I retrospectively added a single older post, my first post on this blog was Flickr geo tags. It's honestly nothing to write home about, and the following posts would be fairly mundane, but that's okay.

I wanted to start a blog for a few reasons, primarily as an online memory of things that would trip me up. Then knowing that I'd written about a problem before, I could just "google myself" to find the answer. That, and I also wanted to share my experience of running a new business, using my blog as a diary.

One of the unexpected side effects (but in retrospect, obvious) is that my communication skills improved and so did my spelling. I always found English skills hard as a kid (everyone close to me is pretty sure that I have some degree of dyslexia), but as I practise writing and spelling more and more each month and each year, it's become much easier.

My blog started out as a WordPress blog (and actually got hacked a number of times to promote viagra and cialis…which frankly I've no idea… also why I eventually moved).

Since it was WordPress, it meant that the first (and second) design was a free template from the generous Wordpress theme designers. I registered remysharp.com on 13-June 2005, with the first incarnation of this blog on September 1st 2006 (and no, I have no idea what I did with the domain for those nearly a year and a half…!).

Below is the first visual version of my blog, and I recently added the attic to my blog showing off the designs and reasoning behind each update. 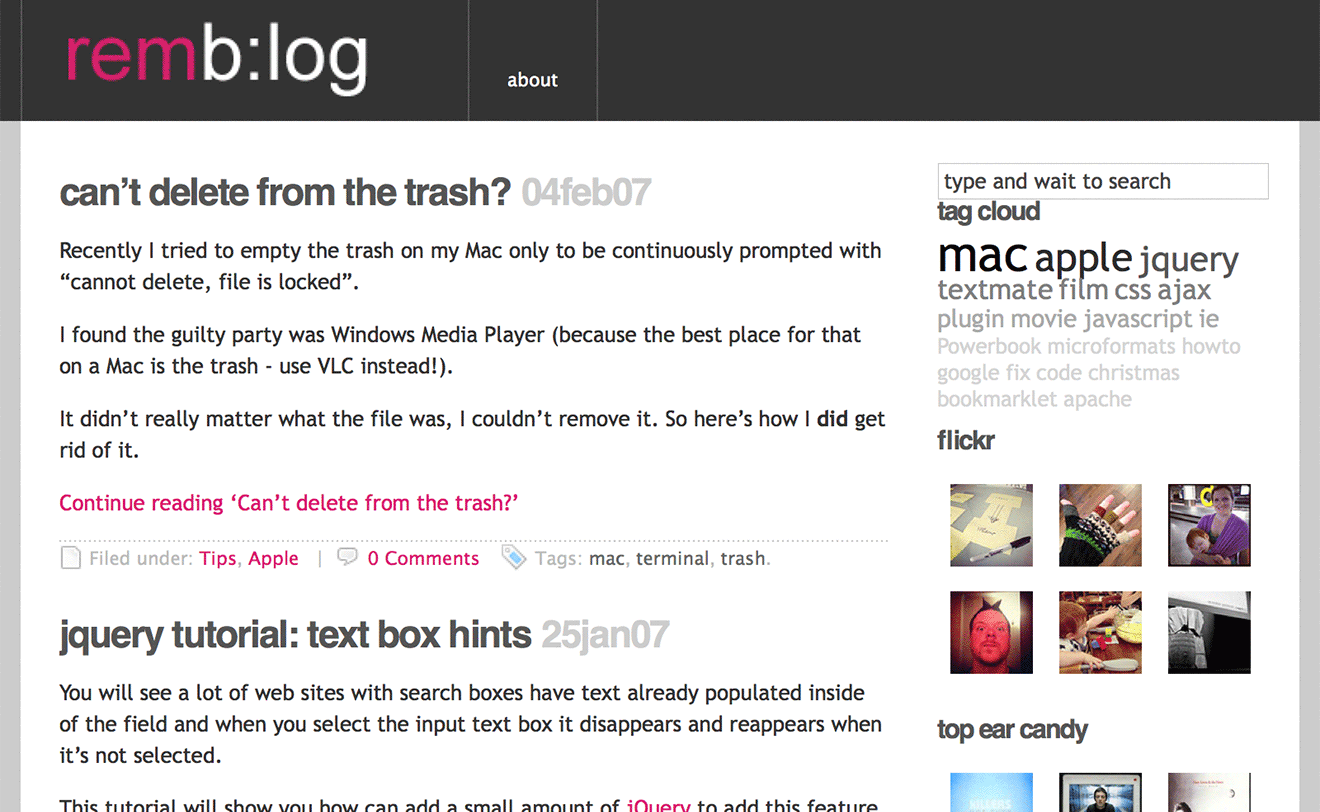 By 2014, I finally got off my derriere and completely wrote my blogging platform from scratch to run on node.js. The production version of my blog is a thin routing server that delivers static files. I wrote about the process too, and now everything is on github for anyone to edit and send me a pull request if they please.

The best of my blog

I've run some analysis from the stats on Google Analytics (which I think I had from day one), and below are 10 of the most read posts I've written (based on relative views):

Proudest aspects of my blog

The stuff I'm most chuffed with on my blog after all this time, is that the blog is fully designed by me and it's all open source.

More importantly, every single URL on my blog that's ever been published still works, and even better than that (for me) is my archive showing off the decade of writing I've been producing over all this time 💪

What happened in those last 10 years?

I started my company, won a CSS book, created a popular twitter script that would later appear on Bruce Campbell's website. I found a game I'd created mentioned in American Scientific, finally did the London to Brighton bike ride.

I gave my first conference talk, hacked and created JS Bin, then launched our conference: ffconf (Full Frontal back then) and later co-authored a book with my good friend Bruce.

I had the worst year of my life, and the following year we had our rainbow baby, Ellis.

I started working on JS Bin full time and hired a small team, talked openly about paying to speak.

Returned to working solo and finally got my body in shape and blogged about some of the painful aspects of running JS Bin.

I also launched confwall and number of other smaller side projects, like nodemon.

And quite possibly a bunch of other important things. Mostly though, I started my family with my amazing wife and partner in life: Julie.