Super niché I know. I've been playing with Zeit's v2 now platform, and in particular I wanted to access a low cost (read: free) database with as little technical overhead as possible.

Somehow I thought that Firebase's Firestore would be a good match, but if you try this at home you'll run into some roadblocks pretty early on. So I thought I'd share those issues.

I'd also recommend looking and reading the Architect design philosophy too.

Although Zeit are offering now dev for local development (released a little over a month ago), but it's still very fresh out the oven and I've run into a lot of issues (some I've been able to feed back).

That aside, there are still patterns you can use to speed up the local workflow (like using micro with a bespoke dev server).

Using Zeit's integrations, Google Cloud can be connected and you get a GCLOUD_CREDENTIALS environment value. This contains a base64 encoded string of your JSON authentication details (that would be shared with Zeit).

To replicate this offline, I took the contents of the app-xxxx.json and encode and add to a local .env file.

The now dev picks up the .env values or I'll use my own environment tool: @remy/envy.

It's not terribly obvious (in the related documentation) that you need to do this, but you'll want to include the following line:

This code will decode the environment value, then turned from text to a JavaScript object, which the serviceAccount expects to be.

My first attempt to deploy was to include the firebase-admin and herein began the issues.

Firstly with node dev, when I tried to use set on a reference, it would result in:

Super useful eh? Notice in particular the error is coming from a compiled file on line 260078. Zeit's (new) Now platform, for want of a better explanation, will rollup all the used dependencies into a single file. So the stacktrace is fairly useless.

I've no idea why Google would drop support for node 8.10 - but I'm guessing it was for a feature in node 8.13 that suddenly appeared (and at least they made it a breaking version change).

Downgrading to firebase-admin@7.x gets the local server working, but upon deploy, Zeit's build fails when the single route that uses Firebase is 10.7mb.

The initial limit is 5mb and it can be increased, but in doing so, it's likely that the endpoint itself is going to take longer to boot, consume more resources and these aren't good things.

Removing the firebase-admin dependency means moving to REST calls. The online REST documentation explains how to authenticate your requests, then how to make the requests.

The main gotcha I hit was that the URLs to the firebase endpoints must include .json (without it causes a 401 response).

I then provided a shim for the requests, ensuring that the auth token is requested on every invocation of the lambda route.

Without the dependency, the lambda doesn't need more memory, so it's all good.

It worked…but…even though the Lambda was based in Brussels and the Google Cloud firebase was in "europe-west" a database transaction (token auth, get and put) is consistently costing me 1 second. Which is too much. 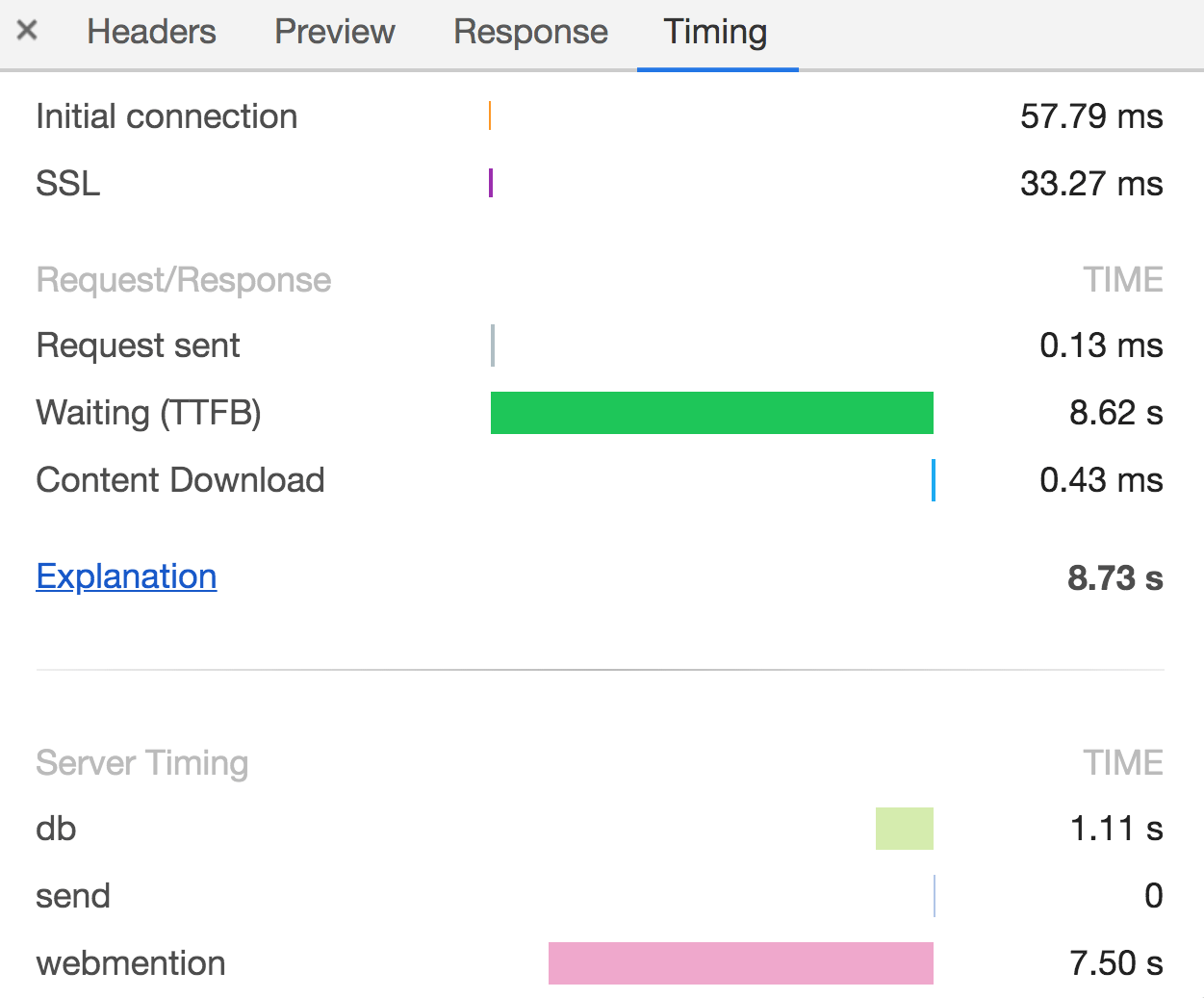 I'm capturing these custom timings by setting the Server-Timing header, which can be very useful in these situations.

Brian LeRoux tells me using DynamoDB I should (be able to) see 9ms response times, so that's what I'll move to next.