As much as this sounds like a new webapp (and indeed over a decade ago I owned the domain Kajinka - can't remember what it was though), no, this is the start of my multiple sclerosis (MS) drug treatment which, I guess lasts as long as I do.

The last sentence sounds like I risk croaking, I mean that I'll be taking this medication for the rest of my life (unless "they" find some way to reverse the effects of MS, I guess). 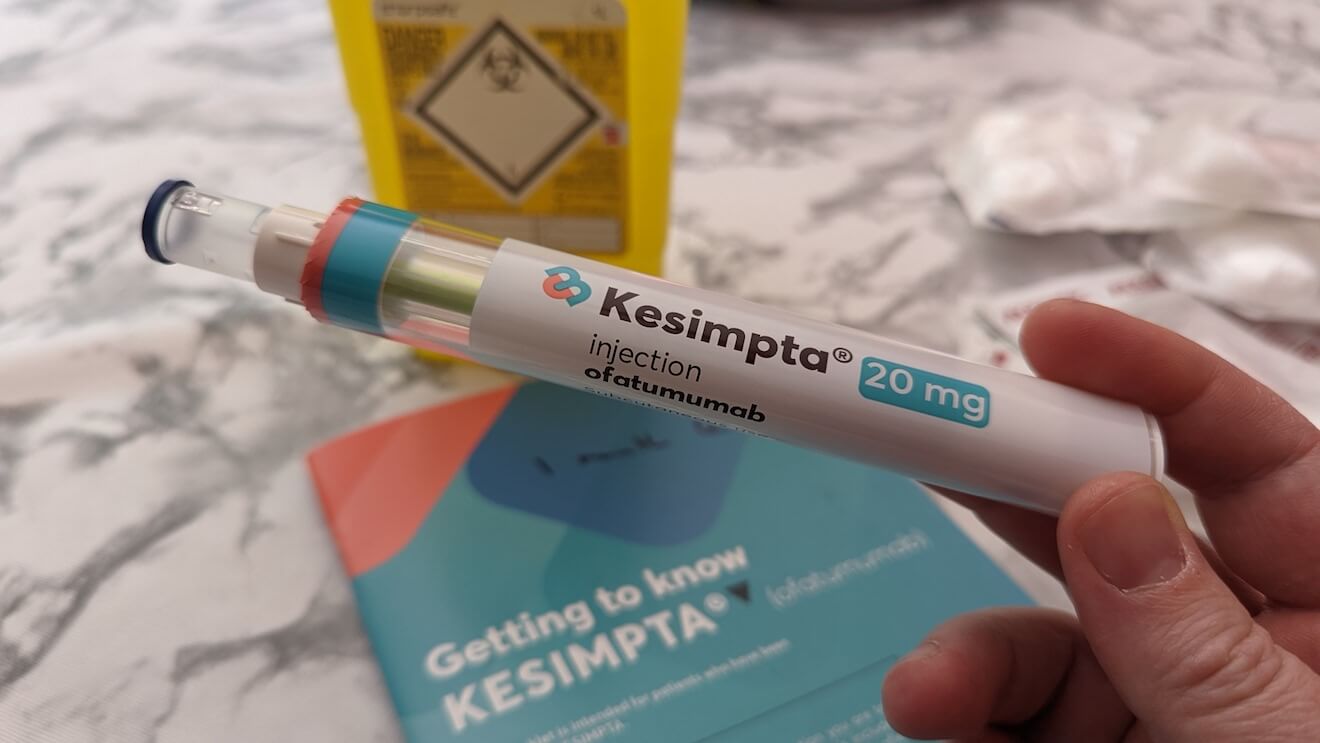 Kesimpta, which of course as an even more obscure medical name (which I either forget or can't spell!) is a monthly injection delivered by what effectively looks like an EpiPen in the thigh, belly or shoulder.

What's convenient about this particular drug is that I can keep the injection pens at home in the fridge and I'll have a 3 monthly supply to self-inject. The other options that the doctors offered me both infusion at the hospital either on a monthly or bi-yearly basis, the later requiring that I be in hospital for 4 hours for each session. There's pros and cons to each, and the monthly infusion was ruled out as I carry the JC virus which increases the risk of PML - which is frankly frightening.

What it's supposed to do is remove B-cells from my system. B-cells are part of the immune system, but in multiple sclerosis, the immune system attacks the protective layer around nerve cells. That damage is irreversible and what (from what I understand) responsible for MS symptoms.

The drugs also known as DMT, try to reduce the chance of a relapse and is supposed to slow down the progression of the disease. Fun stuff.

What this means in practice for my body is that my immune system is purposely reduced (those B-cells are also responsible for immunity), which means apparently no cuddling snotty babies. Though the reality is that with my young kids going to school and bringing back all variations of The Lurgy it's just something I'm going to have to balance in my life.

The real reason to start drug treatment isn't to then be hidden away from all possible infections. The treatment is supposed to make life easier.

It's supposed to reduce the occurrences of relapse (I've got the relapsing remitting kind of MS).

As I said, the actual delivery to my system is through a pen injection. I had my first last Monday. I chose my thigh (largest and easiest to rest a steady pen on), and though I was expecting a sharp prick sensation, it was more like a thunk into my leg. Quite simple.

The needle is injecting into the skin and fat, pushing a liquid in over a period of around 5-10 seconds. Then it clicks to say "remove me in about 5 seconds". Removed and the process is over.

I was warned the first couple of injections my body would react like I had the flu - but that most people would recover by the next day.

My injection was at midday and by 3pm I feel my body starting to feel fatigued and a little off.

By 7pm I was buried under covers with chills, I was achy in weird places (like my wrist), my feet felt completely numb, I had a headache and felt like crap. I had the foresight to get paracetamol in my system from 3pm that day.

I felt quite awful.

By morning, in fact by 5am, I felt right as rain. Perhaps because I'd felt so bad, I actually felt amazing and full of energy (though I suspect it was more recoil from the night before).

I've felt a little tired since (which is pretty normal symptoms for me) but no sight of side effects so far (touch wood…).

Though the injection is monthly, the first are weekly for 3 weeks, the skip, then monthly - so my next injection is this coming Monday. The flu-like symptoms are supposed to be much less and then not at all - if other people's experiences are anything to go by.

I've written about my NHS experiences before let alone the care we got after Tia.

The care and follow up since being diagnosed with MS has been exceptionally high, and as I've said before, I'm in no doubt that is in part due to the postcode lottery and where we live. Though, at the same time, my original consultant did miss two lesions on my spine - so there's that…

Along with this, I have an MRI booked this weekend so that the doctors have a baseline reading at the start of drug treatment, plus the boat load of blood tests I did prior to the drugs being selected.

I'll always be grateful to the NHS for their role in the UK's health system, and I prey it'll be around for my children as adults.

The weeks and months to come

Obviously being week zero, anything could really happen. I'm trying to keep a diary of the injections and experience after. There's a pretty long list of side effects (as always) but there's some that are pretty common such as sore throat and runny nose (but with hayfever, how can I tell the difference!).

I'm also due for a consultant appointment in mid-October where I'm guessing they'll review how things are going too.

I am a little nervous about being in busy public places given that my immunity is going to be lower, and this is a genuine concern with ffconf coming up in November, but I'll work something out - I can't (continue to) live in a box for the rest of my life! I've already been to the gym and continue to use the cleaning products and anti-bacteria wipes all over the equipment.

If you have any questions, please feel free to do so in the comments and I'll do my best to reply.