Netlify just recently launched a simple analytics offering for $9 per site per month. It's a great addition to an amazing platform and when the analytics are enabled, the last 30 days of traffic will be backfilled. It doesn't intend to replace marketing analytics and is (currently) a rather static view of traffic.

I've been thinking about analytics, logging and metrics for a while now, partly in an attempt to free my site of trackers (such as Google Analytics) so I wanted to break down the pros and cons of what I'm currently trying.

For the short term I'll run all these analytics and logging options. There's also important action points: if, like me, you redirect to a 404 page, ensure that it's as lean as it can be as it's a wasteful place to be spending bandwidth - a single source was consuming 800Mb/month from a single hotlinked script that landed on a 404 page.

Finally: review again in a few months to make sure aims are still aligned.

What are my aims?

Before I jump into the tools, I really need to ask myself: what are the aims of this kind of analysis?

Re-targeting is the only item that would require Google Analytics. Though I have extremely poor success rate with online advertising, I've used re-targeting with ffconf ticket adverts and it's worked for a small handful of sales. I'm on the fence as to whether this is enough to justify keeping GA as it's another contributor to the privacy hell we've somehow made for ourselves.

The most critical aim is the bandwidth. I've already had warning emails from Netlify saying that my usage is getting close to the 100Gb of bandwidth that's free. Without understanding where the bandwidth is going, I'm flying blind. Without this insight I'm "hoping" everything will be fine.

The remaining aims are entirely for vanity, I could live without them, but I've had them since the early inception of this blog and it's even helped me make my popular posts page.

These are entirely server side generated (in my mind akin to apache common logs). Netlify has an undocumented API that provides the data which means it doesn't take too much to tweak the date ranges or the number of results shown (for instance I was able to extend the sources linking to my site to 200 results in stead of 5).

I really liked that I could just enable the add-on against my site (I had already entered credit card details) and the analytics appeared. What I was particularly interested in was the bandwidth (given I had already had one bandwidth limit warning) and where the traffic was coming from:

Direct traffic and google aside, that list of domains are not linking to my site. They're linking to scripts I've written in script tags. So this isn't really a visitor to my site (even though Netlify counts this as a "pageview"). When I checked those top sources out I found some linked to existing scripts, but some linked to scripts that were 404ing. For my site, this has quite an impact.

My blog has been live since 2006 and over that time I've written a lot of code and posts that help folks. In some of these posts I'd provide example code, such as my mousehold plugin. Naïvely I allowed hotlinking to the scripts (whereas I should have set a text/plain content type on the scripts originally - alas hindsight).

Fast forward nearly thirteen years, linking to the script causes a 404 (remember 15Kb) and there's a significant amount of hotlinking in just the last 30 days.

Just one of these sites links to a bad URL, 53,165 times in the last 30 days, accounting for 800Mb of bandwidth traffic!!! Clearly I'm doing something wrong†.

† In fact, it's around 1.8Gb per month because there's a bug in Netlify's redirected 404s - I've raised this issue so hopefully it can be fixed.

What Netlify analytics really gives me

Netlify's analytics are server logs. This means that every single request that Netlify handles is logged. In some ways this is useful because it'll give a true sense of web requests (again, useful for bandwidth and error monitoring).

The flip side of that is that it's not really representative of "visitors" (or isn't for my long running blog) because it includes requests where a script or even img tag points to my site.

This is highlighted when comparing the Netlify analytics to Google Analytics show below respectively:

Of course, and importantly, stats like this mean whatever you want them to mean. It's not that one is wrong or not, it's that they have different meanings.

I don't have much to say on GA. It's a very well covered topic elsewhere. What is important is that by using GA on my site, I'm contributing to Google knowing more about you for better or worse.

Personally I don't want my site to add to the pool of data that's collected about you and then used, potentially against you without your knowledge.

On the other hand, I do need market ffconf to my visitors which I've done through re-targeting campaigns. This does work whilst also being at conflict with my own moral judgement.

A nice perk of running GA on my site since 2006 is that I'm able to export all those pageviews and generate a most popular page. I've got a small(ish) node script, which again is a vanity feature.

I came across a post by Ben Hoyt on how to replace Google Analytics with GoAccess. GoAccess is a tool to generate analytics from static logs - logs that might come from Apache or nginx for instance.

What's clever about Ben's method is that by using Amazon's Cloudfront web hosting and logging, adding a pixel "tracker" in the source of the HTML captures a "page view".

The URL to the pixel needs some extra query arguments that is then processed by a python script (on Ben's post) which turns logs from Cloudfront into common log format, which in turn is passed to GoAccess and generates nice analytics.

I'm using this pixel tracker on my own blog to generate logging for my static site. It's on a public URL so you can take a peruse yourself if you like: https://remysharp.com/_logs 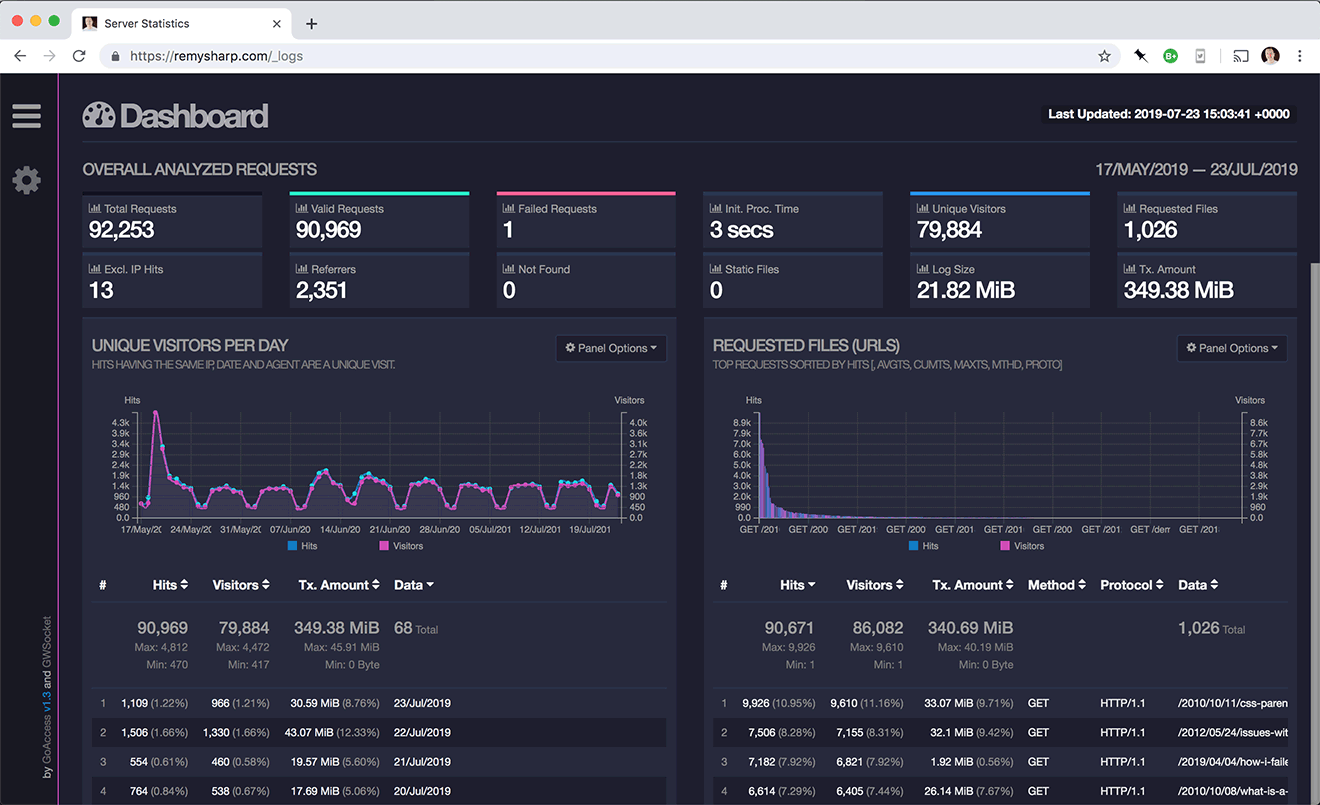 I've extended Ben's parser a little with the hope to add slightly more data points to my logging, specifically status code and bytes.

You can use the code I'm using from github here (note that you'll want to edit build.sh as it points to my current S3 bucket…and there's no docs!). To deploy the log site, you'll also need to add three environment values: ENV_DEFAULT_REGION, ENV_SECRET_ACCESS_KEY and ENV_ACCESS_KEY_ID.

To get the status code and bytes, I've added the following to my blog's layout template:

Can you spot the slight problem? The b value for page size (bytes) is the document length…completely ignoring gzipped content. So the data sent is potentially pointless.

Also, I've noticed that although the data.statusCode works correctly in the static HTML, I don't really see it in my logs, which makes me think it doesn't work. Who knows, maybe one day I'll update this post with a fix…!

Currently I'm running three sets of logs on this blog:

Which is best? I'm not sure. I'll likely turn off Netlify as it doesn't add anything once I've investigated and resolved all the main errors. I'd like to think in a years time I would have removed Google Analytics.