I've had the good fortune to be given a trial Microsoft Surface machine from the folks at Microsoft, and I agreed (and wanted) to share my particular experience with my return/toe-in to Windows.

This first instalment will focus on the hardware and tactile aspects of the device (since mostly I'm still configuring my development environment on the machine).

With everything I talk about here, please keep in mind that I'm comparing to my day-to-day usage of an Apple MacBook Pro 2015 spec'ed out to the max (most RAM I could buy, etc).

Overall, the feel of the Surface Book is really quite nice (again, I'm comparing directly to my daily use of a Mac). It's beautifully designed and has already drawn a couple of "wow, that's nice" from friends and family just by seeing it on the worktop.

The material is really nice too. It's like either a very lightweight metal or a sturdy plastic. It seems like it might be cheap material looking at it closely, but it stands up well to touch and press. One particular thing I liked is that since this material is a matte plastic, it doesn't get oily in the way the metal surface of my MBP sometimes does on the trackpad and wrist support. A bit weird I admit, but maybe someone else has experienced this! :)

The weight of the Surface Book is decent. I think it's slightly heavier than the MBP that I have (but I'm thinking perhaps 0.5lbs?).

I watched a video comparing the screen-lifting technique compared to a Mac, and it hadn't crossed my mind at all but the screen on the Surface lifts perfectly well, leaving the keyboard seated. i.e. I wouldn't want to lift the screen only for the keyboard to follow up and me have to prise the screen and keys apart!

Seated on a work surface, the laptop is fine. Placed on my lap is a slightly different affair. Since most of the weight is in the screen (because it's a tablet, and I'll come back to this), I can't have the laptop on my lap without my hands keeping it from falling off.

The reason the weight is mostly in the screen is because, as per other Surface devices, it's also a tablet given the press of a key (or software button). It's certainly heavier than most tablets I've used, but equally it's larger and packs a lot more punch than any other tablet I've used too.

I'm not sure I would travel without the keyboard base, but this obviously means that I can't.

Normally there isn't much to say on the matter. It's a standard fig 8 adapter (apparently that's what it's called - I used to call them "the tape deck power things"). What is neat is that the powerblock also includes an integrated USB port, giving me another power port if I want it.

The keyboard, and keys are soft to touch and a pleasure to press. The keys are a light plastic, matte like texture, and don't come off cheap (which would be entirely possible with this kind of material).

Going from the Mac to the Windows layout of keys there are a number of noticeable differences, most of which I can adjust fairly easily, i.e. swapping of the @ and the ", backticks and slash positions and copy/paste being in a slightly different location compared to the Mac.

The area I'm finding hardest are the two extremities of the keyboard. Firstly, my Mac has a single backspace key, and shift+backspace turns it into delete. It took me about 2 weeks (of irregular use) to realise that the Windows keyboard has both. Moreover, I kept finding myself hitting fn+backspace which would reduce the screen brightness, and then no idea how to use the keyboard to bring the brightness back up! Someone eventually put me onto Scott Hansleman's blog post on shortcuts.

However, I've been using the Surface in anger for the last week and I've come to realise the hardest part for me to master is the bottom left where a number of control keys are. On the Surface, the keys are: ctrl, fn, meta, alt. On a Mac, the keys are: fn, ctrl, alt, meta. Specifically those ctrl and alt keys which we use a lot are in completely different positions which is why I keep randomly hitting the fn key and the meta (windows start) key - both of which are typically useless in the cases I'm working in.

Finally, one area that's still entirely a mystery to me, is how I invoke special characters. Specifically, I use emdashes and ellipsis quite a bit both in my blog but also on twitter. On a Mac, I use alt+. to get an ellipsis. On Windows...I've no idea. I've literally used google to find an emdash and pasted into twitter! I don't know where this kind of stuff is documented either.

I love the touchscreen. I've got a Google Pixel (laptop) and although I initially thought the touchscreen would be a gimmick, it's not at all and becomes quickly a natural gesture to reach out to the screen to do a thing.

The screen on the Surface is lovely and crisp to look at. I'm assuming it's retina (or equivalent), and the touch is responsive whenever I've used it and doesn't show any signs of pressure when touching the screen (though it's possibly my memory is harking back to the early 2000s when touch screens were terrible!).

I didn't realise the Surface came with the stylus, but I'm so glad it does. It's really fun to use. From the first day I really had a decent play with the Surface, the kids had a turn with the stylus and the screen and it seemed really natural to draw with the pen (and fingers). 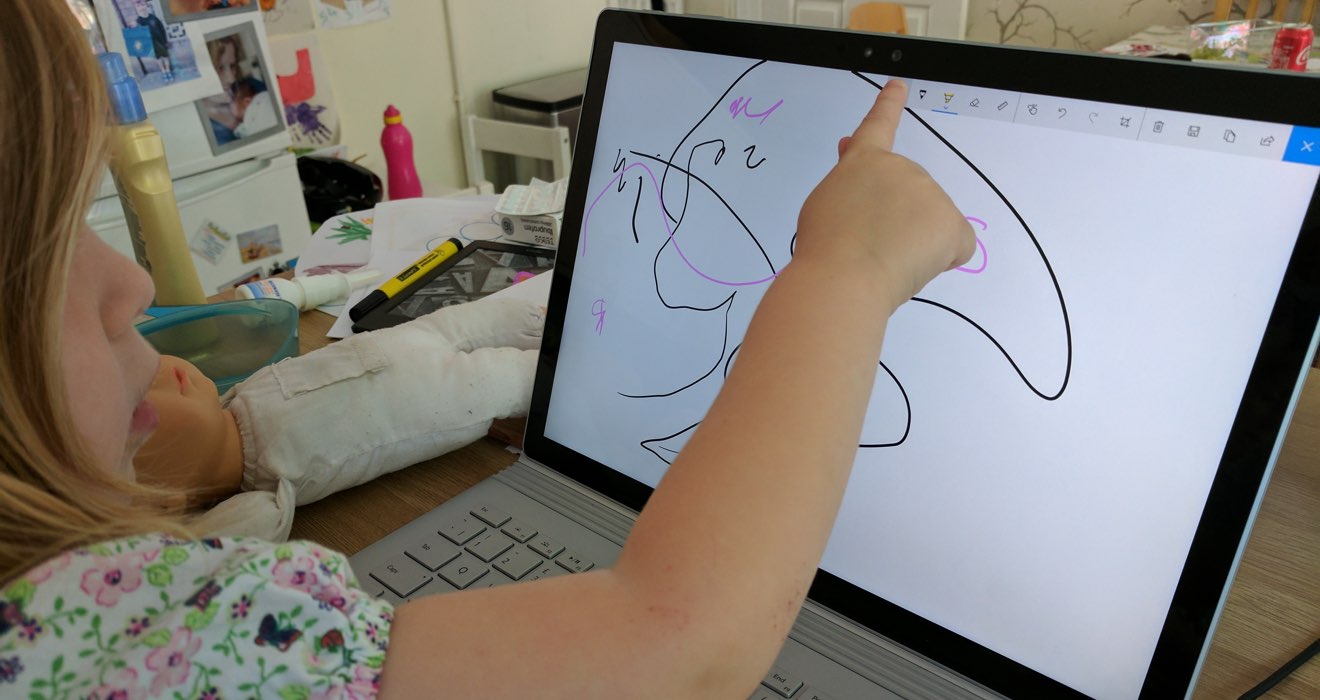 I've always been wary of extra fingers or hands causing interference, but that's not an issue at all. Combined with touch, the screen really comes to live and is amazingly simple to interact with.

For the first few weeks though, I figured the pen would magnetised to the back of the screen, and rather loosely. It seemed like a daft place too, because when I went to reach for it behind the screen it would be totally out of the way. Of course, in the last few days, I plonked the pen next to the laptop, and it just jumped to its actual position on the left of the screen, and much more securely.

I think it's just a little weird that there was no(?!) documentation (or I completely missed it unboxing the Surface). That said, it's hardly a deal breaker!

This is where my experience has been absolutely awful. I will add though, I think that it might just be me, as I've heard from peers that the trackpad is overly sensitive for some people.

For me however, the trackpad's click works about 20% of the time. I have to be really intent and accurate when I want to click on anything. Which only adds to the problem, because when I'm pushing harder on the trackpad, it's less accurate and sometimes just moves the pointer right before the click actually fires, causing some other thing to be clicked.

This issue is also why I quite often use my finger to touch or use the stylus to get some interaction working. I suspect a separate mouse would work around the issue, but for now it's extremely frustrating.

Again, I believe this might be limited to the device I have, but it's made me wary of buying one personally (as I expect to return this device to Microsoft at some point) without first giving the trackpad (and the keyboard) and damn good test. Slightly related, the 4 key seems to be 50% responsive too, important as I type !$ into BASH a lot!

A really nice bit of kit. Definitely strong in helping me feel confident that there's a life after Mac (which I'm so desperately seeking). I was asked why not look at a Linux machine recently via Twitter, and my response is simple: Apple's hardware aesthetic experience is top notch, and I'm used to that and don't want a step down. The macOS I couldn't care for, so I want to move to a device that is a pleasure to use. So far, the Surface Book is doing a great job to compete for that title.

(The next Windows posts will be on the software side, ranging from regular apps to my development workflow).