There's a huge number of web conferences and meetups now and although a code of conduct should be a default part of the event, I thought it might be useful to share what we've done with ffconf as we come up on our 9th edition.

A short conversation on twitter with Karolina Szczur, AKA @fox prompted me to think about how we can go beyond the copy/paste code of conduct that appears on conference web sites.

In true form to my white-privileged'ness, I had jumped in with "well, not all events…". After a little retrospective, I realised that maybe it would be useful to others to share what we do for ffconf. I'd the first to acknowledge it's far from complete or perfect, but if you're organising an event, perhaps this can help you. 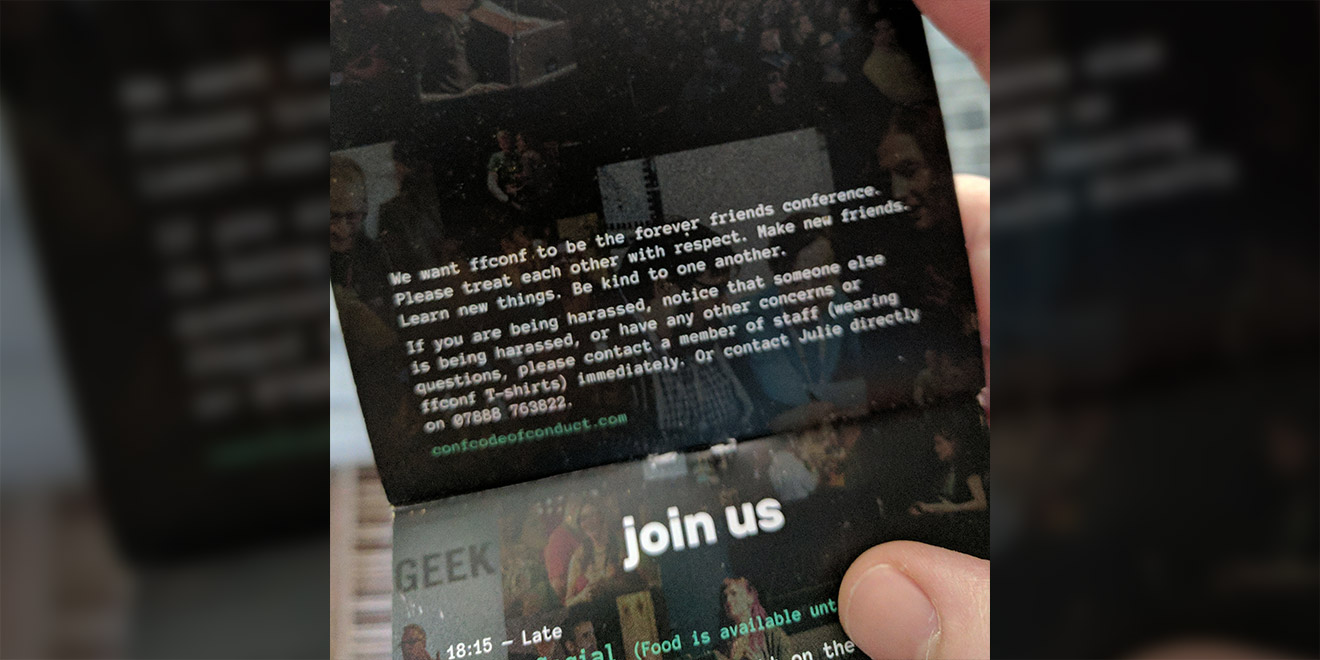 Before we start: on whether there's a need

I wanted to touch on this, because there's always individuals who feel that events shouldn't need a code of conduct. The code is not for those individuals, that's the first thing to say (and should be the last!). It's worth adding though, that many, many organised gatherings do include codes of conduct.

Here's my school's code (applicable from 1990s). Here's (one of) NASA's code of conducts, here's Twin Peaks' code of conduct, there's codes used in many many different areas. It just seems that it took until a few years ago for (majority) the web (events) industry to wake up to this normality.

Codes of conduct, ethics and how individuals should conduct themselves, certainly in professional environments, has long been established.

Some years ago, I lifted jsconf's code of conduct and put it on it's own domain and allowed for easy translations.

For me personally, particularly as a white cisgender male, I don't have the experience or insights to write a code of conduct myself, so being able to use the Ada Initiative based code of conduct is a huge step up. Although a lot of the content is "obvious" to me, I've never had the words to articulate the sentiment.

Our event has always stated that we follow a code of conduct at our events linking directly to the confcodeofconduct.com website. But let me clear: this isn't all we do. That document is a template basis to start creating a safe and friendly environment. Although I shouldn't have to add this, I will: the code of conduct is not for me, or people like me. Telling me that everyone should be decent, doesn't help others.

Let's be honest, the code of conduct document is like a "stay off the grass" sign. Sure, you weren't planning to walk on the grass, but it's there all the same. And no, it doesn't stop people from walking on the grass. The way we prevent those violations is to provide a good support system of education, to be vigilant, to protect and finally, if necessary, action against.

Code of conduct is supplementary

Let's be honest: copying and pasting a code of conduct is not enough. It's a start, but it should, I think, be supplementary to your attendees security.

We do a number of things and I wanted to list a few others that I've seen that would be worth considering adding.

Make it easy for attendees to contact you both ahead of the event.

For pre-event we have the @ffconf DMs open and with all our email communication we include a real email address for people to reply to.

We've always included who was behind ffconf on the website, and more recently we include our names, but I suspect it's not entirely trivial to find our email address though it's certainly possible (although it's name@leftlogic).

For the run up to the actual event we send out a full details email and make this available online (posting and pinning a tweet on @ffconf), which includes our email address (of the individual organisers) and a temporary phone number that can receive text messages (for us we thought this would help people feel a little less pressure to report - as it's less direct, and if necessary, we can call them back if and when required).

The reason this is a temporary phone number is simply our own privacy as individuals not wanting to post personal mobile numbers on the web.

We also point out that staff are wearing specific t-shirts in the case someone wanted to ask a face to face question or raise an issue.

I've seen other events do the same, and when we open the event, along with the basic introductions and safety notices, we iterate a shortened version of the code of conduct, pointing out that contact details are available in the lanyards (which acts as an offline method of access).

There's a lot more that we could do, I'm sure. One specific item I'd like to add this year is "no photo please" lanyards. I've seen in a previous year that an individual was trying to hide their face from a picture, so (after it was already online) we removed the picture and cropped the individual out before reposting. Had they had some visual indicator, we would have known not to post the picture (and in truth, we removed the individual on the assumption that they didn't want their picture taken).

From my perspective (again: white male), pictures serve as useful social media promotion. "Such-and-such was at this event, so they're probably an authority on X". However, I recently attended a talk where the speaker specifically didn't want their photo taken. The talk was inspiring and important, but it was only seeing it first hand, that I could see how this individual needed to protect their own safety by making it clear they didn't want pictures taken (possibly for fear of backlash on the internet, or worse, in their real day to day life).

That's all to say: there's value in these precautions.

I am a white, European (for the time being!), cis, man. I've never considered my safety at an event, not once. My privilege is my safety. Our events must provide the same affordances to others.

This means putting the above in place at my event. It means looking beyond the circle of familiar faces to speak at my events. It means that I will work towards you feeling the same. I'd like (although perhaps a pipe-dream) for everyone to enjoy the event the way I do.

All of this intent is all very well and good, but, referring back to my earlier metaphor, someone can still walk across the grass. Someone can still hurt another person or make them feel unsafe. Our actions are important.

This part scares me the most. Because it's hard. It doesn't mean we'll ignore it though.

Face to Face conflicts are hard to deal with. Body language, spectators, social expectations and any number of extra factors make handling a breach of the code of conduct a challenge.

I've only read online of a single account from a breach (IIRC it was from RubyConf…I will try to find a link). Both see how and moreover, that other events are handling breaches is important and helpful for learning, and using their approaches as a template.

The bottom line is that most events (that I attend in the web industry) are not run by people trained in human relations. So we (or I) look to others as an example of how to behave.

We've been fortunate (or unwitting?) in that we've had no reports of misconduct. I'm hyper aware that this doesn't mean it hasn't happened.

On the other hand, we (Julie and myself) have had a few small reports after the matter where individuals have felt unsafe (…unsafe isn't the word they used, and not quite right, but I hope you follow my sentiment).

It's unfair to expect that those individuals should have reported the event at the time (or even that they wanted anything done). However, I have been keen to prevent those individuals that we were able to identify from returning to our event - but in truth there's no system, per se, to prevent them from buying tickets, it's something we would need to process by hand.

I collect resources on handling these situations and ways to make events safer. If you want to expose yourself to more I'd recommend reading through some (if not all) of the posts I've collected on pinboard, and following the authors and advocates where possible.

If you have any reading recommendations or suggestions, I'd love for you to share in the comments, in your own blog post or via Twitter (or you can email me if you prefer not to post publicly).