Full Frontal 2010 ran last Friday and (as I secretly hoped) was a huge success. As with last year, we had a good number of people asking how they could get one of the Full Frontal t-shirts (as sported by yours truly). And this year we're giving the opportunity to get your hands on one, and 100% of proceeds will go to charity. 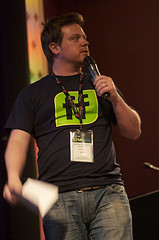 On August 31st 2010, Julie and I lost our baby Tia and our world was turned upside down. We're far from "over it", so Full Frontal was a huge step for us, one that we had planned to be very different. Running the conference with Tia as a newborn baby was going to be one thing - but running it without her was something completely different.

When we realised people wanted t-shirts, we twigged that we could auction the t-shirts off and raise money in Tia's name at the same time. So 100% of the proceeds will go to SANDS, a UK charity who both support parents in a similar situation to us but also promote research to reduce the loss of baby's lives.

The listings end on Tuesday 23rd November around 5:30pm (UK time), and we're posting to both the UK, Europe and the US - so please do get involved with the auction and help raise some money for a good cause.

The complete listing with current bids can be found here:

And individual listings are here:

Note that we've not placed the order for the t-shirts, so you'll be able to specific the sex and size of the t-shirt so that it fits just for you.