When should we stop caring about IE6?

Microsoft's bastard child needs your love, but surely not forever? Simon raises a point that even though IE8 is on it's way - due to IE6's market share, IE8 is almost good for nothing.

So I went to TheCounter.com and starting from Jan 1999 I pulled up all the records for IE until February 2008, and parsed them to create a chart showing the rise and fall of each IE version. 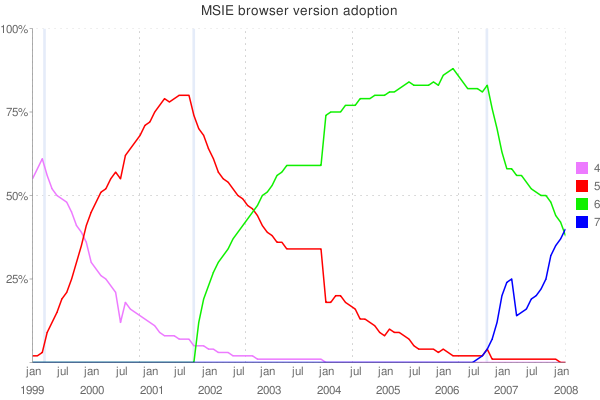 The chart shows every months worth of percentage take up for IE browsers 4 through 7 in the whole browser market.

I've included markers in the chart to highlight the launch of each new browser (from IE5 onwards).

There looks like there may have been a data correction for IE7 around February 2007 which could explain the large dip. Nothing particularly important happened during that period on the browser timelines.

What does this show?

Generally, your normal user (i.e. not the techies) will upgrade their browser if it's forced upon them. This is either through forced updates from Microsoft, or, more likely in my opinion: PC upgrades.

New PCs mean new browsers, and if you buy a machine today you'll have IE7. In a year, if you buy a PC you'll have IE8 - and that's where the real take up will happen. Since PCs are getting cheaper and more powerful (as they keep doing over the years), PC turnover increases.

Sure Microsoft will advertise IE8, and this will encourage change, but I believe PC turnover will be one of the greatest factors driving the market shift.

Depending on your views, a browser below x% of the market does not have to be supported. For me, this is any browser below the 10% mark. If it's a standards based browser, then my layout will work anyway (I'm looking at you Safari).

From this data, I'm predicting that by 2010 IE6 will have a small enough market share to be ignored.

Sure, 2010 is pretty far away right now, but it'll be here before you know it.