Just a big thank you to everyone who came to Julie and my 10 year "togetherness" party last Saturday!

We hosted an 80s party at Heist in Brighton and it was a ball. Lots of superb costumes and lots of retro tunes.

Here's the invite I put together for the occasion: 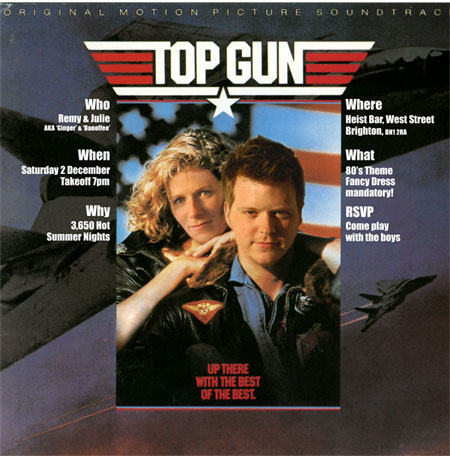 There was a huge amount of preparation put in to the party on our (Julie and my) side. I say huge, because normally I wing these things!

The invite, for example was prepared with snippets of time over about a month. A few people even thought we posed in costume for it. Really the secret was in the lighting that I took the photos of Julie and myself in. It happened to match the lighting on the original Top Gun CD cover - the rest was a lot of tone matching and erasing. We then took the sly approach and printed the invite using the Tesco's photo printers and sent them out (a cheap way of getting good quality printing).

Heist was found by looking at some of the Brighton venues. We knew we weren't expecting hundreds of people - probably at best 75, so we didn't want to end up having to guarantee turn out, or the turnover at the bar.

Heist offered the downstairs room for £175, which had a private bar (though bottles and shorts only) sofas, room to dance, private loos and private sound system - in particular - that we could plug an iPod in to.

Admittedly we booked it in September - because we expected to be fighting of the the various Christmas dos.

Finally there was the music - 80s 80s 80s. I spent about 6 months refining the play list. Scouring all my 80s memories, classic 80s films (Beverly Hills Cop, Breakfast Club, etc.) and all those terribly cheesy CDs that you throw to the bottom of your CD collection.Â  If you're interested, here's the 80s party playlist (and yes, there are songs that didn't come from the 80s, but there's only a few!) The next step was to listen to it over and over, which would result in me weeding out the annoying song and keeping the golden ones.

The only near hiccup was that I deleted the entire playlist the day of the party. iTunes being the super easy app that it was doesn't expect anyone to be so stupid, so there's no undo facility to bring the playlist back to life. I almost had (more) kittens! Luckily it was pretty easy just to skim through the playlist on my iPod and put the songs back in to their meticulous order.

There's a who bunch of photos from the party on Flickr - so take a looksee. Look out for Gene Simmons, Wonderwoman and Indiana Jones. There's also the Magnum, Miami Vice, Top Gun and Madonna followers. Not to mention the other rif raf.