After a number of years away from our screens Bond returns in the incarnation of the blonde bad ass: Daniel Criag (who was equally superb in Layer Cake).

This film sees Bond in his early days getting his double-oh license and playing high stakes poker against the financiers of terrorists.

Originally based on a game of baccarat - where I'm sure most, including myself, wouldn't have the first idea how the game would work, Bond is asked to play against a maths and chess mastermind-bad ass (obligatory scars included) in a high stakes game of Texas Hold'em

The film's guts is really based around the game, and lends some explanation as to how Bond becomes who he is.

When I watch Bond films - certainly the newer ones I always felt I would walk away a touch short from satisfied. I think that's because some of the later films relied a little on the prestige that is the Bond franchise.

With Casino Royale, it feels like a film that stands on it's own two feet.

What's most exciting for me about this film, is how we see Bond at a very early stage of his career, and how we're reminded that Bond, although an infamous lady killer, is actually ultimately a hired hit man.

Casino Royale gets brutal a few times, and more often than not, though Bond kicks ass, he's usually coming away like a battered old shoe!

Don't worry though, if seeing Bond knocked about there's plenty for everyone - babes, brawn and a bit of "now Mr Bond, I am going to hit you in the balls".

Casino Royale is a superb debut for Daniel Craig as Bond, and it delivers some pretty hard and damn cold punches.

Dark, hard hitting, breath of life in to a franchise that should be about a cold hearted killer.

What do you mean, there's a fly in your soup? 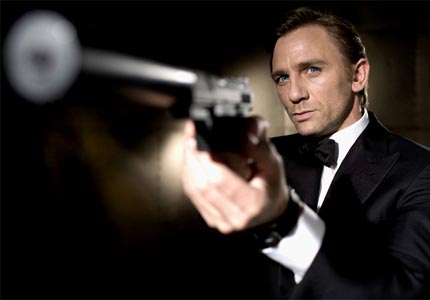