What can I say? It's the first film I can remember crying to in a very long time.

Children of Men opens in London, 2027, and the World has come to a time where all women are infertile. Science can't explain it and 18 years without children, all hope has been lost.

Set against London uncompromisingly exiling all refugees, Theo Faron (Clive Owen) is tasked with delivering refugee woman to the Human Project. She is 8 months pregnant. 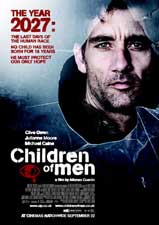 Firstly it really does make my day when I watch a film set in England with English actors (Michael Caine and Chiwetel Ejiofor), give or take a Julianne Moore here and there.

Clive Owen is quickly becoming one of my favourite Brit actors. He plays Theo, the anti-hero that you would want to be or be with in those darkest hours. Look out for the special brand of comedy the director put's his hero through too!

The film is perfectly shot for the genre. The images look treated to give you an idea of the coldness of the future with no future.

The director also employs a great deal of hand held shots (if not for the entire film) that puts you right in the scene, and it's extremely effective - often I found my pulse thumping to the tension.

To me, it was a story about human nature, and how it turns on itself in desperate times, and that the creation of life is the most precious commodity we will always have.

The strongest message I took away from this film was: life can stop war, dead in it's tracks.

A powerful and moving film, gritty photography with great performances all round.