Another day, another birthday

I'm really never really any good at birthdays, but this year, I think I've done a little better. Most people at work knew it was my 28th, even people I'd say I didn't really know. I took an hour lunch break for some food with a few friends (an hour where I work is almost like a lifetime - and the fact I planned it is a double bonus to my credit).

The only thing is, the older and bigger I get, the less the day of my birthday really feels like something other that just another day.

Now, in Julie's defence who has been arranging and buying various nice'ities for my birthday, I do have a week of events going on to celebrate slamming in to my 28th year as a bewildered human.

It just you wake up, and for a moment, the most important moment, it's just another day. I greeted Julie at 6:40am with a "happy birthday to me" (she was only just awake herself), then straight in the shower for the trip up to London.

I worked on a Left Logic proposal on the train. I spent the morning brain-waving a pretty serious performance problem - which I thought I solved, but my prototypes proved otherwise. Took my hour lunch. Yes. Mulled over the performance problem some more, and snuck in a game of GTA on the PSP - cheeky I know, but I won which was a nice birthday treat.

Got the train home. It was late, then delayed, then cancelled. Took a different train home.

Sweated. Lots. More than lots. Anyone who knows me, it was a lot!

Then Julie surprised* me, and we went out for a rather full, floating boat Chinese meal.

Being 28 is no different to 27. Except, perhaps, 28 is the age I will be when I go fully self employed and run Left Logic full time.

* Nothing surprises me. Sad for me I know.

Since I've just worked out how to upload photos when I'm editing my blog in TextMate - here's a picture of my enjoying some fine wine on my 28th. 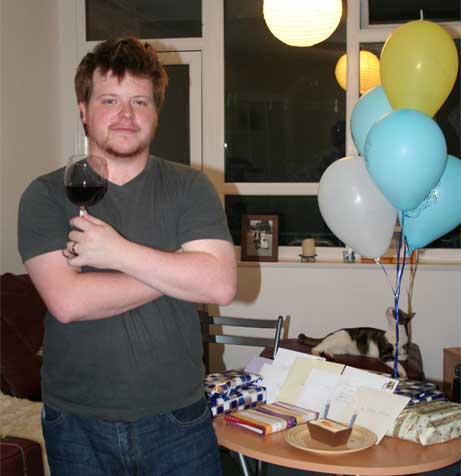