When I took a break from work

This last week I scheduled a week off of work. My second week of the year which given how 2020 has gone was rather not enough. Around mid October I had a bit of an episode in the middle of the night which culminated in me passing out and when I came back round all that was going round my head was: I need a break from work, I need a break from work. That kind of strong messaging at such as specific moment seemed pretty important so I booked myself a week off with the main goal of zero (or next to zero) time on the computer.

And so, that was last week and I'm feeling a boat load better. And this is what I made.

I tweeted this series so if you saw it already, you've seen the contents of this post, but it's here for me to remember.

My kids often bring back (HUGE, LIKE THEY'RE REALLY REALLY BIG) branches from random walks, and some point earlier this year I decided to take a knife to their sticks and idly whittle the bark off. One day I managed to somehow make a cat, sort of… it was supposed to be a mouse, then it was batman then it settled (mostly by itself) on a cat - that you can only view from one angle.

From that, the kids have gotten into whittling and it was really nice during the summer to sit out in the garden, my 6 and 8 year hold wielding stupid sharp knives and us attempting to make something other than a spear out of a stick.

In the lead up to my week of I bought some basswood and for my birthday in September I'd received a simple whittling knives kit (pretty much the stock thing you'd find on Amazon which suits most needs). I did a bit of image searching for "whittling a dog" and found an image I really liked and figured sure, I could try to make that.

Making a little dog for my girl. Though, given this rather solid block of wood... I may have bitten off more than I can chew! 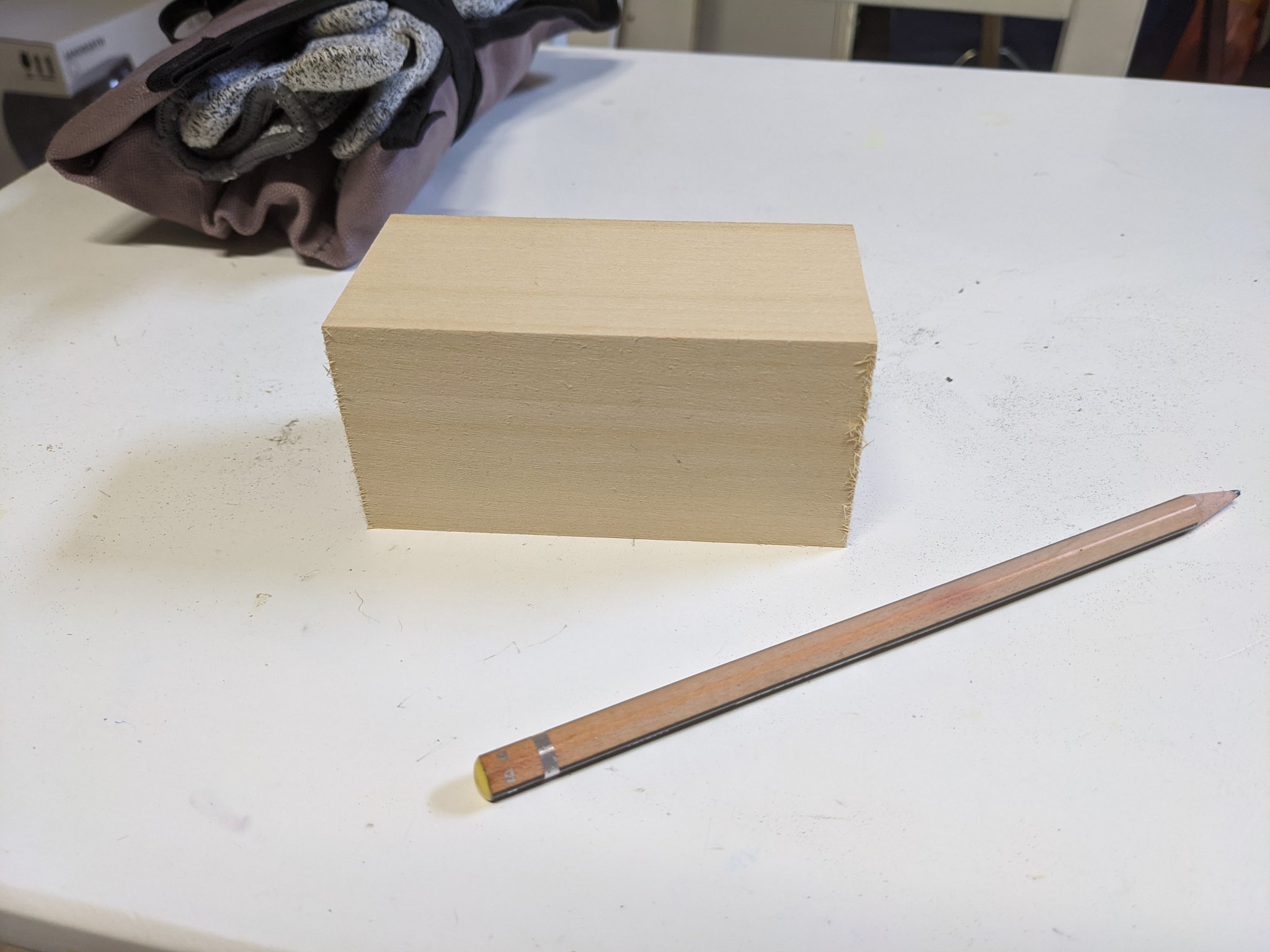 The design of the dog required that I cut under the dog's legs whilst leaving them standing on a platform - something I'd not cut before and no idea if or even whether I could do it.

Sketched a rough outline on the side. That too/front bit is the dog's face.

Lots of whittling to be done! 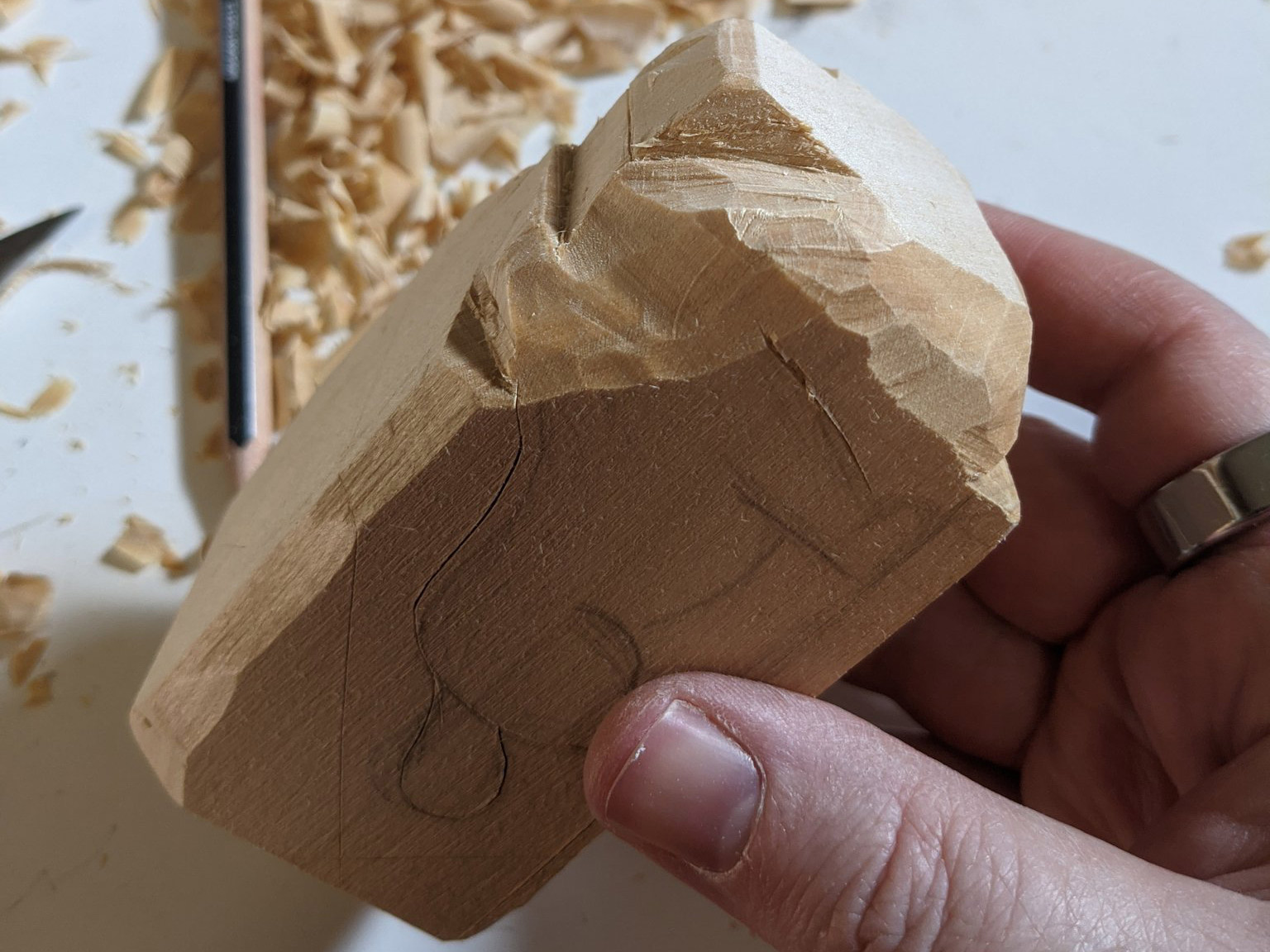 Started to focus on the head - just to give myself something to aim for. I'm starting to see him s little... 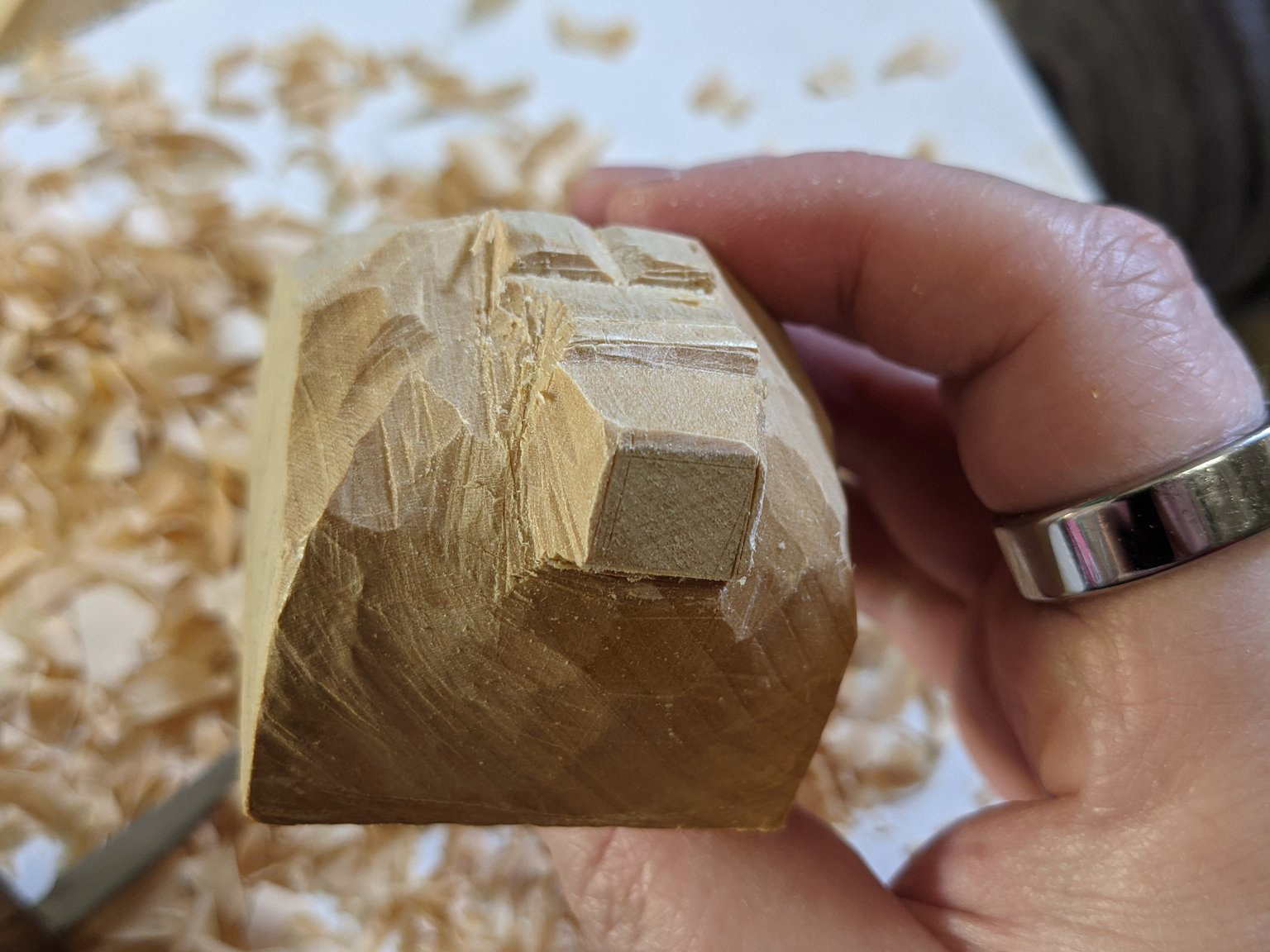 This is where I've stopped for the day (I've got a week off, which means attempting to reduce my computer time and do other things!).

That took about 2 hours. Only sliced one knuckle in the process. Shoulders and feet tomorrow I think. 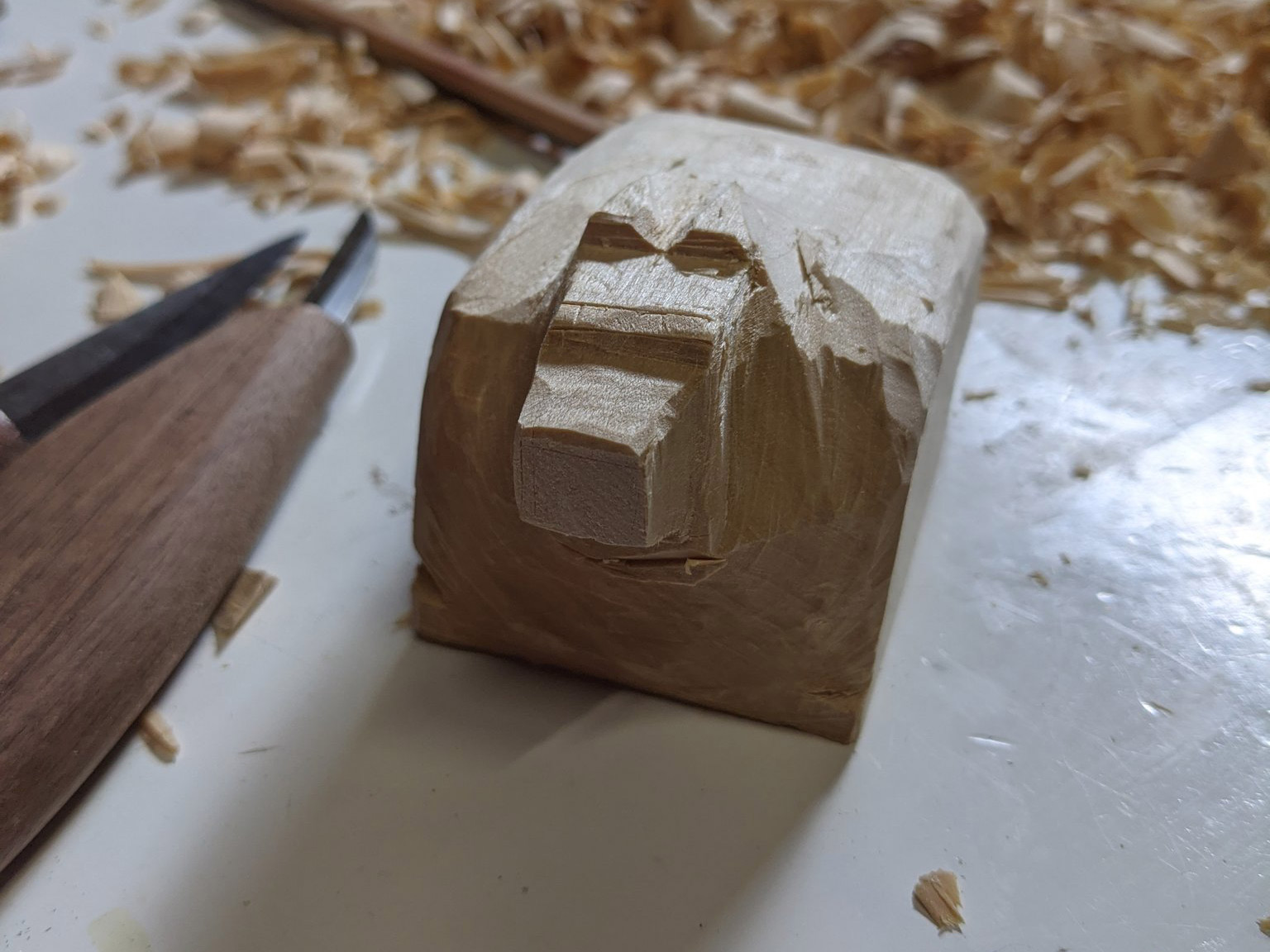 Continued with the dog doodle today. I can't quite fathom how I'm supposed to get though and under the dog legs. 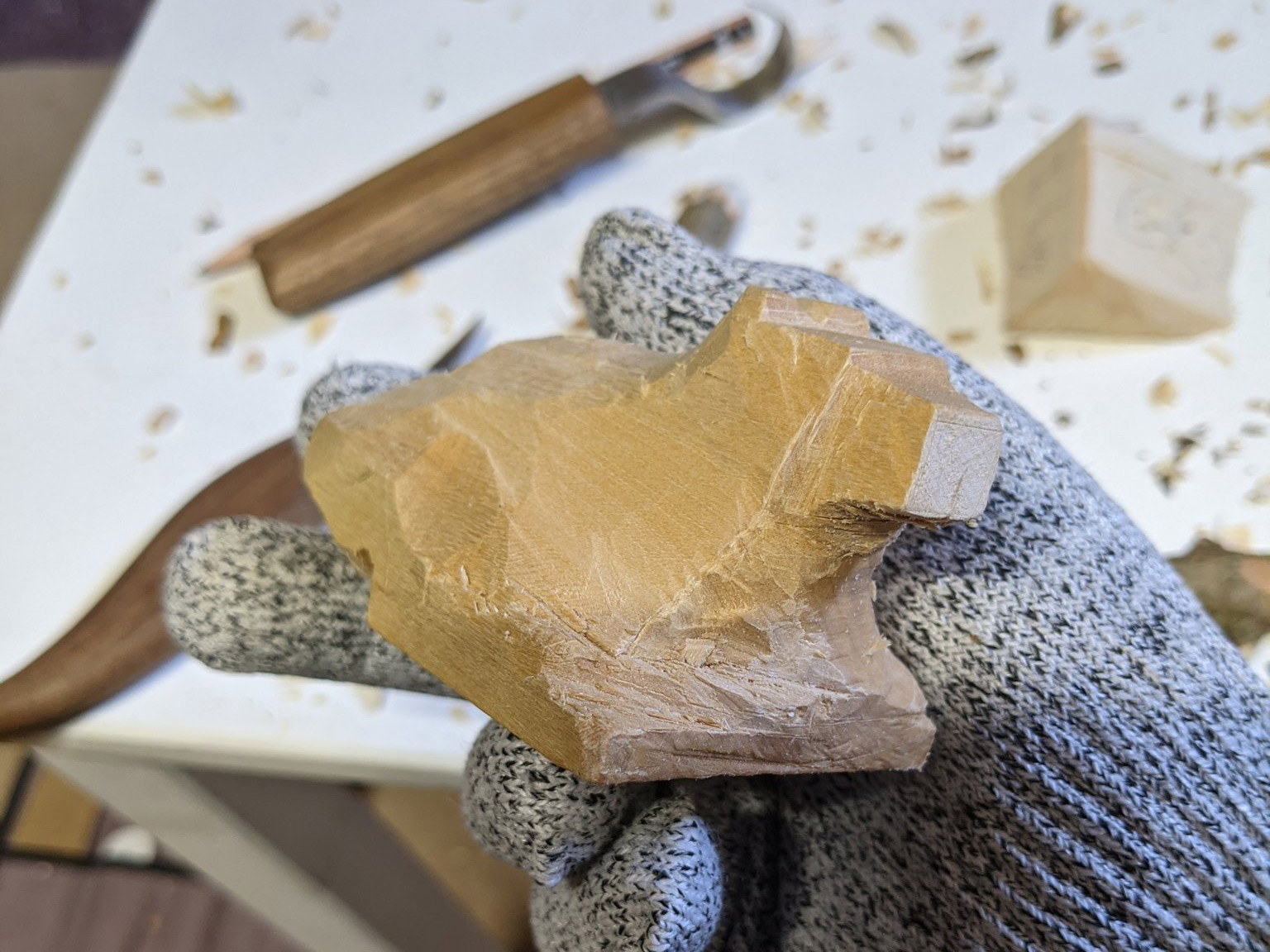 Started hacking a poking. The wood looks terrible but figure I'll fix it in the edit/sandpaper. 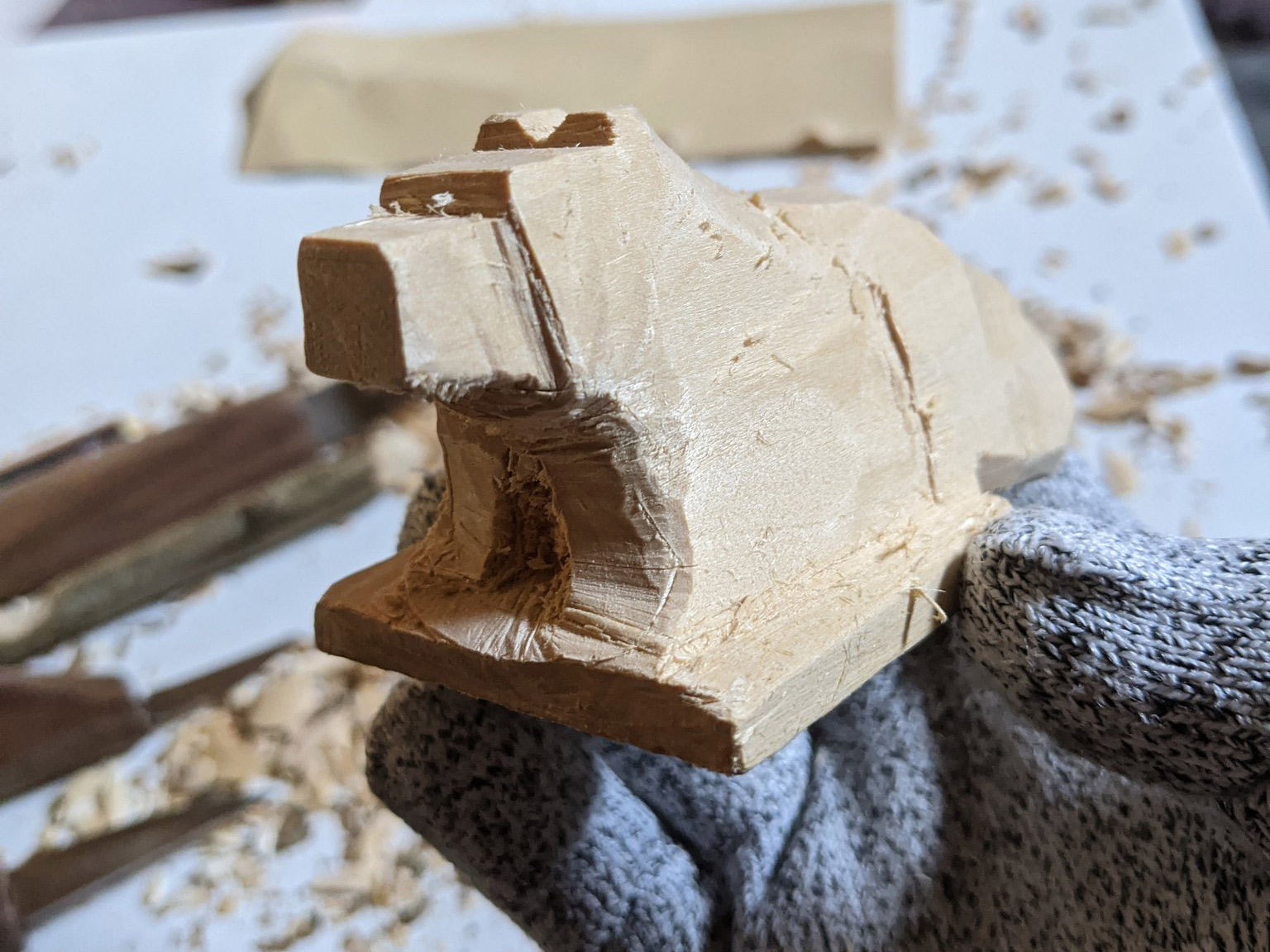 Had a good go at the tail too - just for some distraction, looks less like a beaver now (though still erring heavily on the side of some kind of bear!) 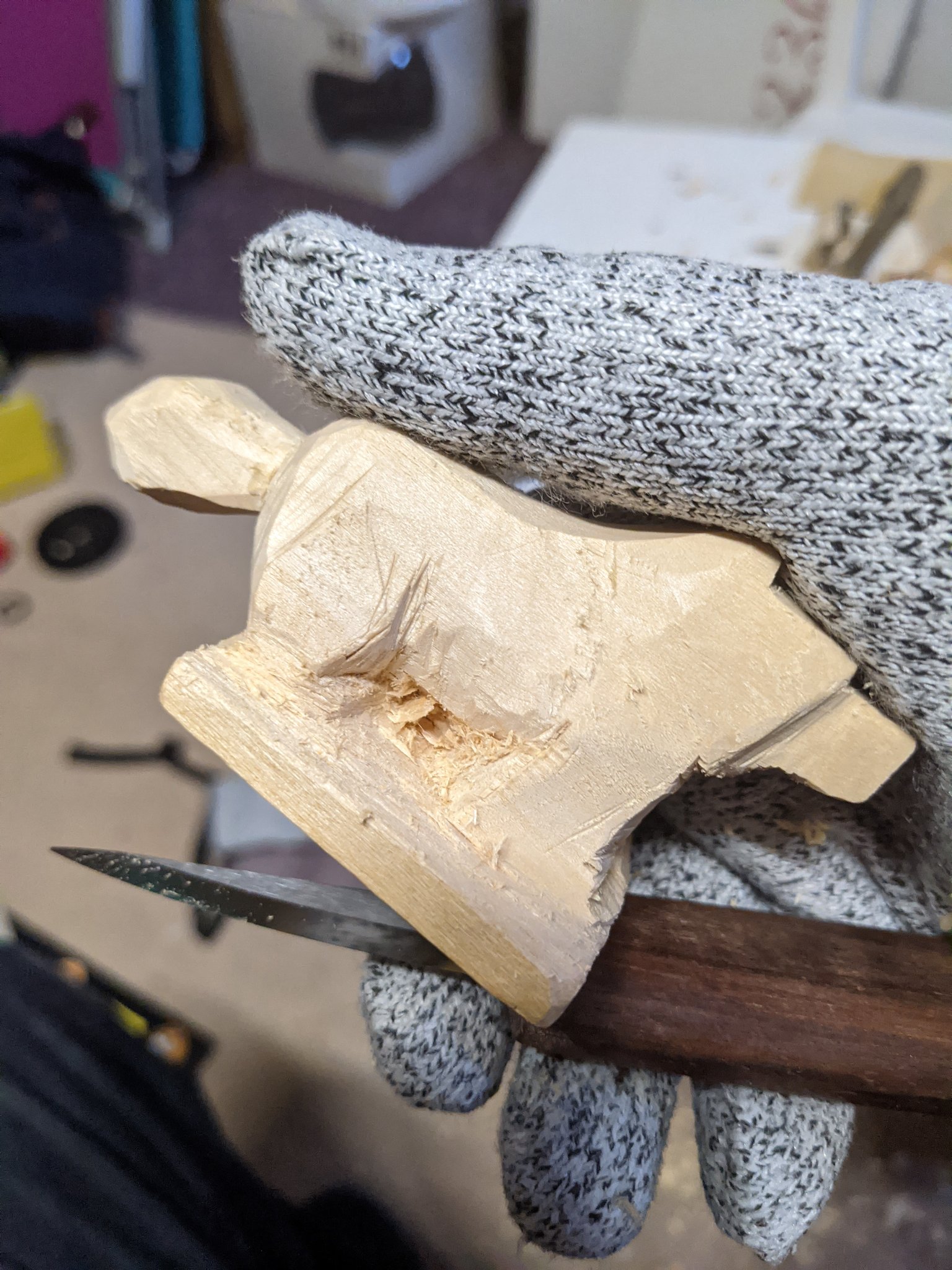 Got through finally. Looks very rough (and bear-like).

I sat for about 4½ hours doing this, totally overshooting lunch.

I'm amazed I'm though and under. Got between front legs too (but still have back to do).

Then got to work on proportions. (Tomorrow!) 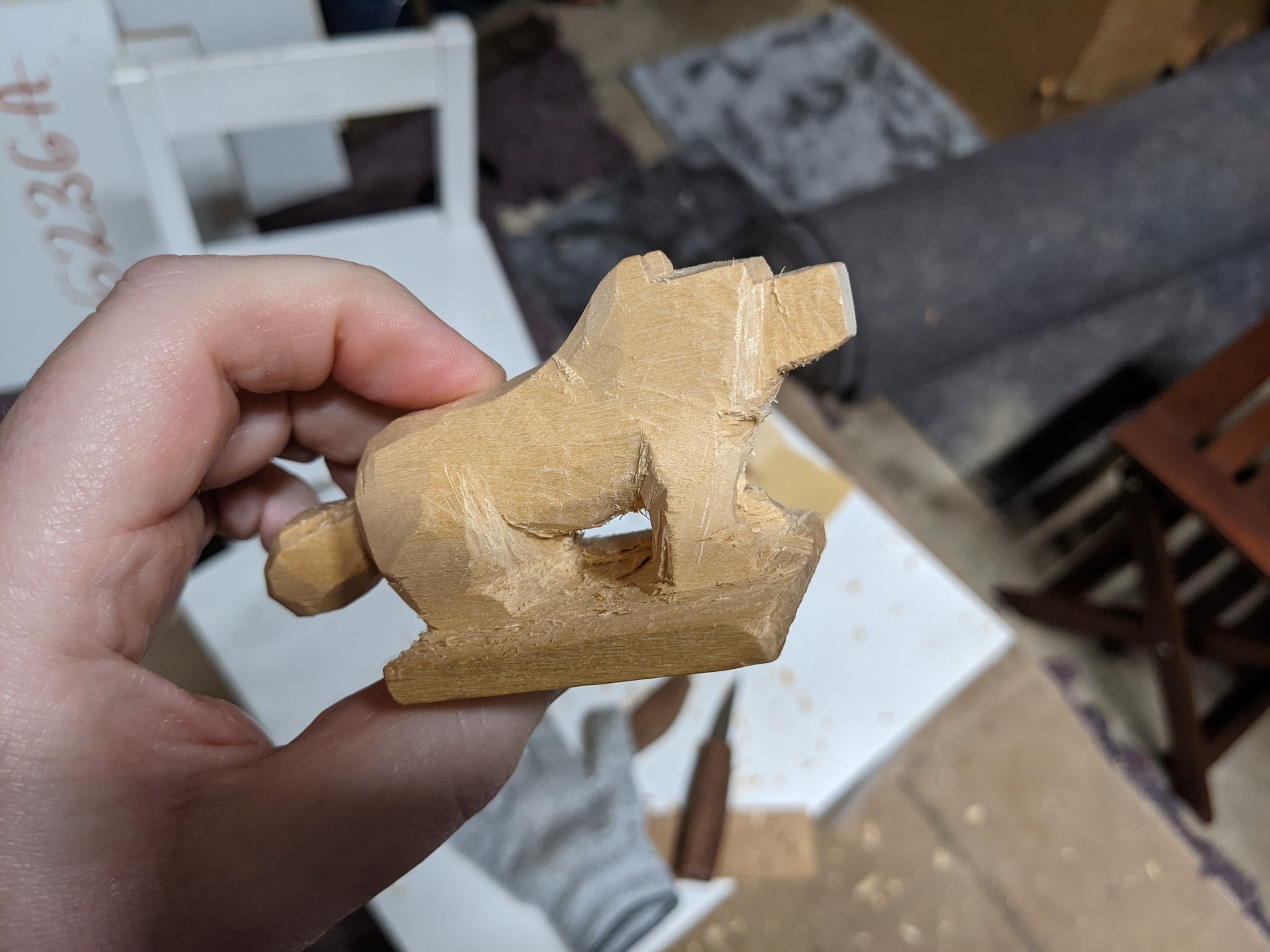 Had to sharpen tools today and made some adjustments that meant the dog has little room for their eyeballs. 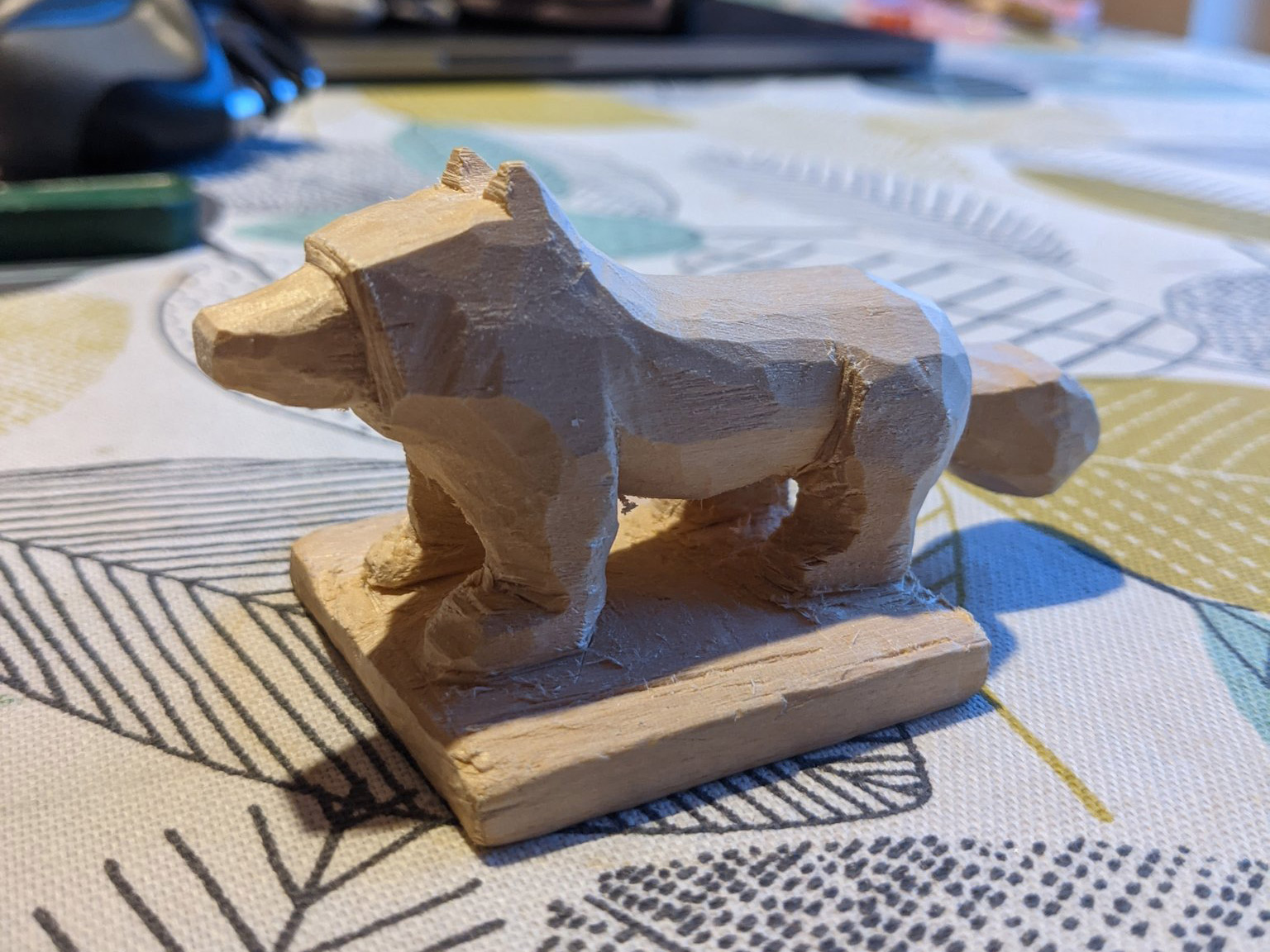 Starting to see the dog again (rather than a damn bear).

And managed to get under and between all the legs finally. But now I need to shrink the dog's arse! 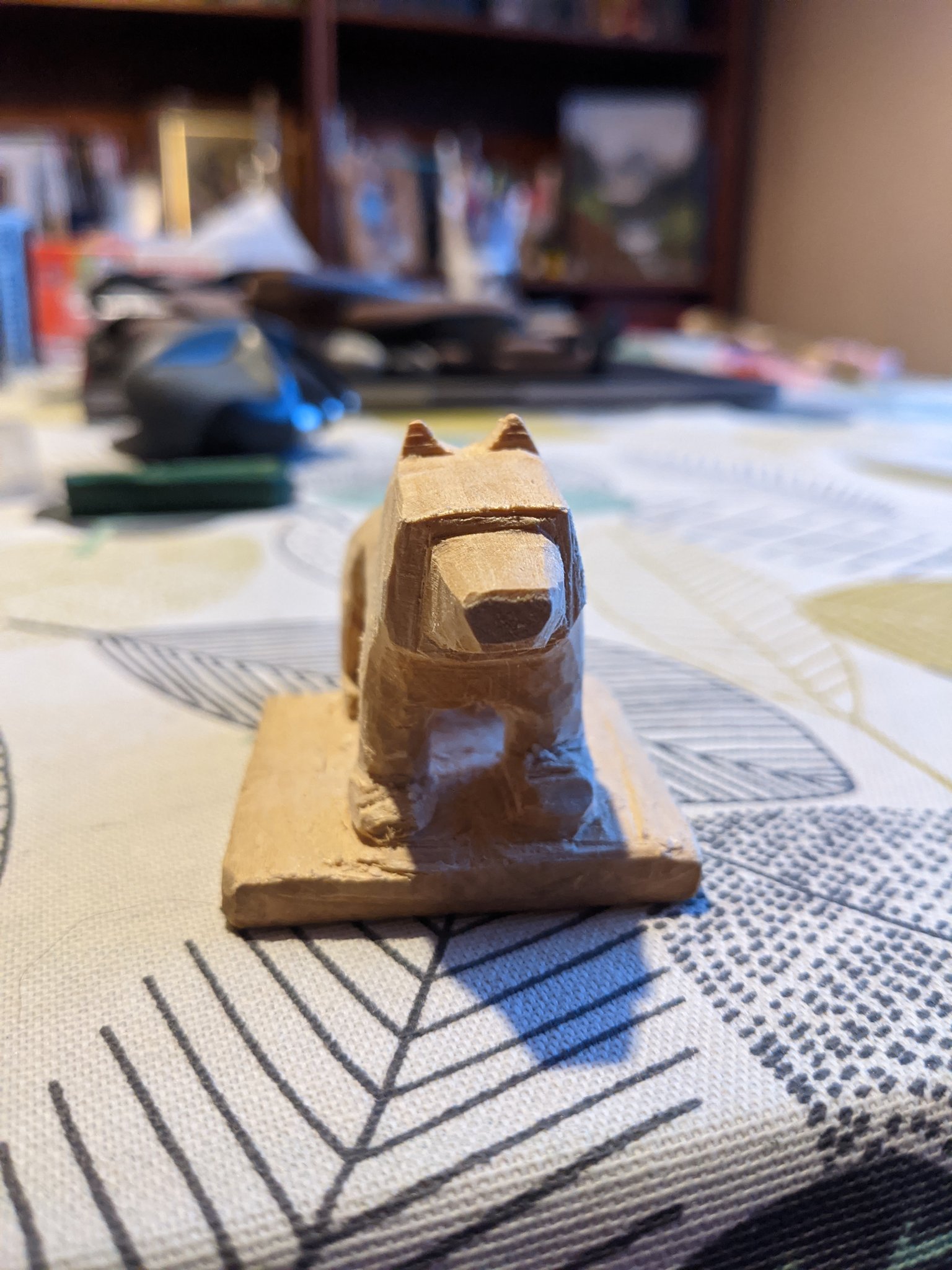 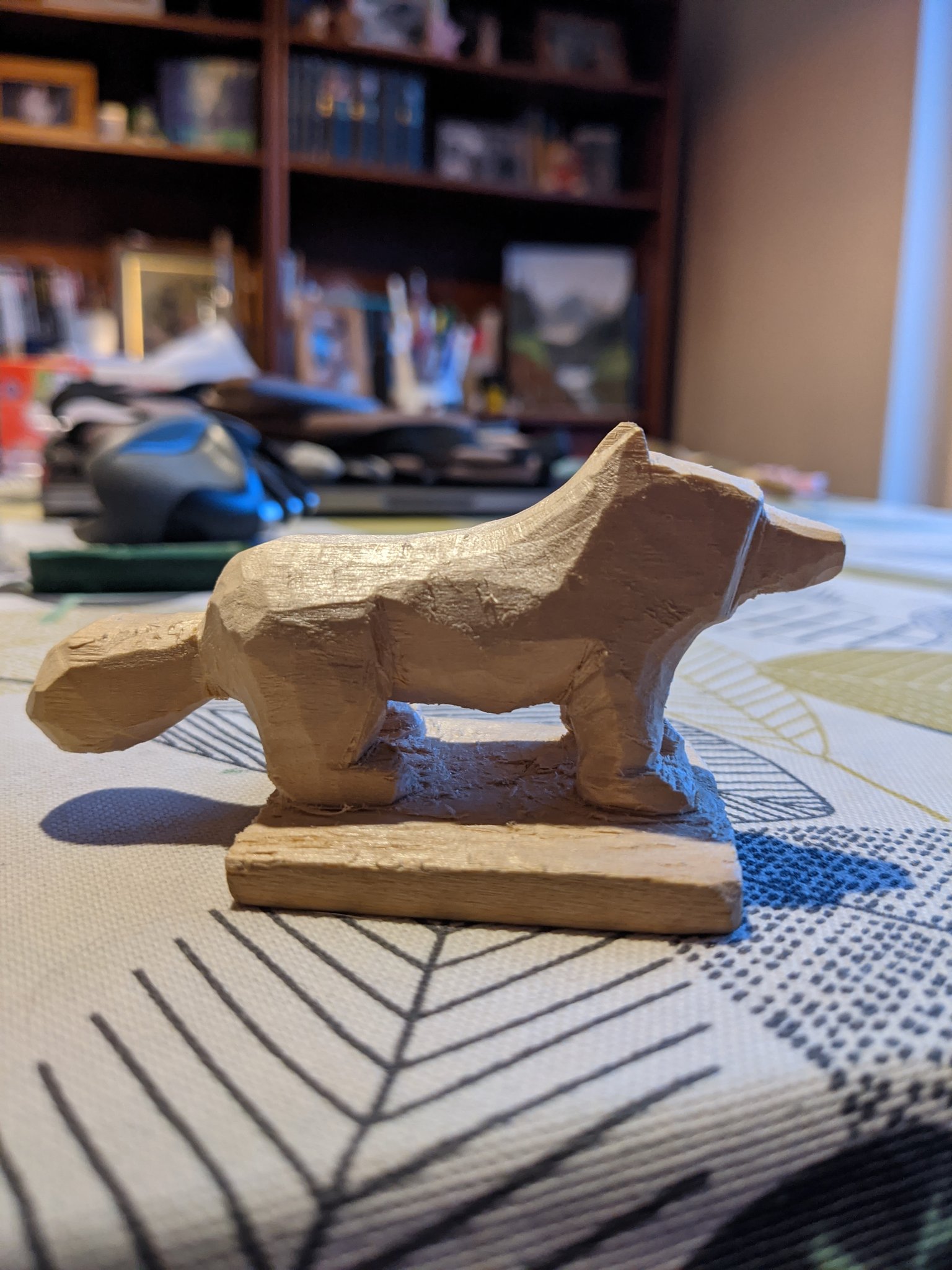 Sanding is pretty much my only hope to get all the busted wood cleaned up under their belly.

First run done with 60 grit. Probably need another run - the plate they're standing on is still fairly rough.

At least it's moved more towards dog and less bear. 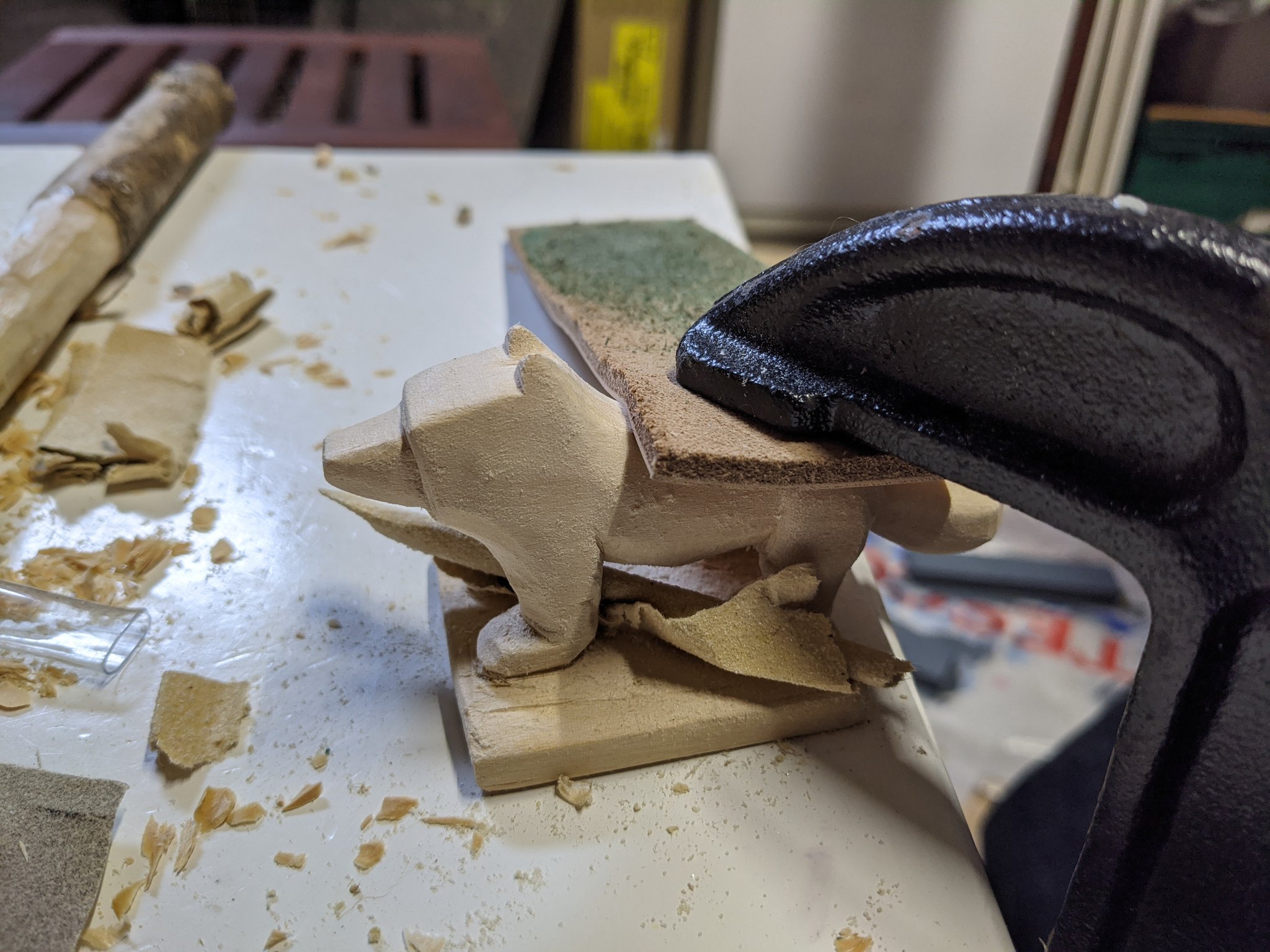 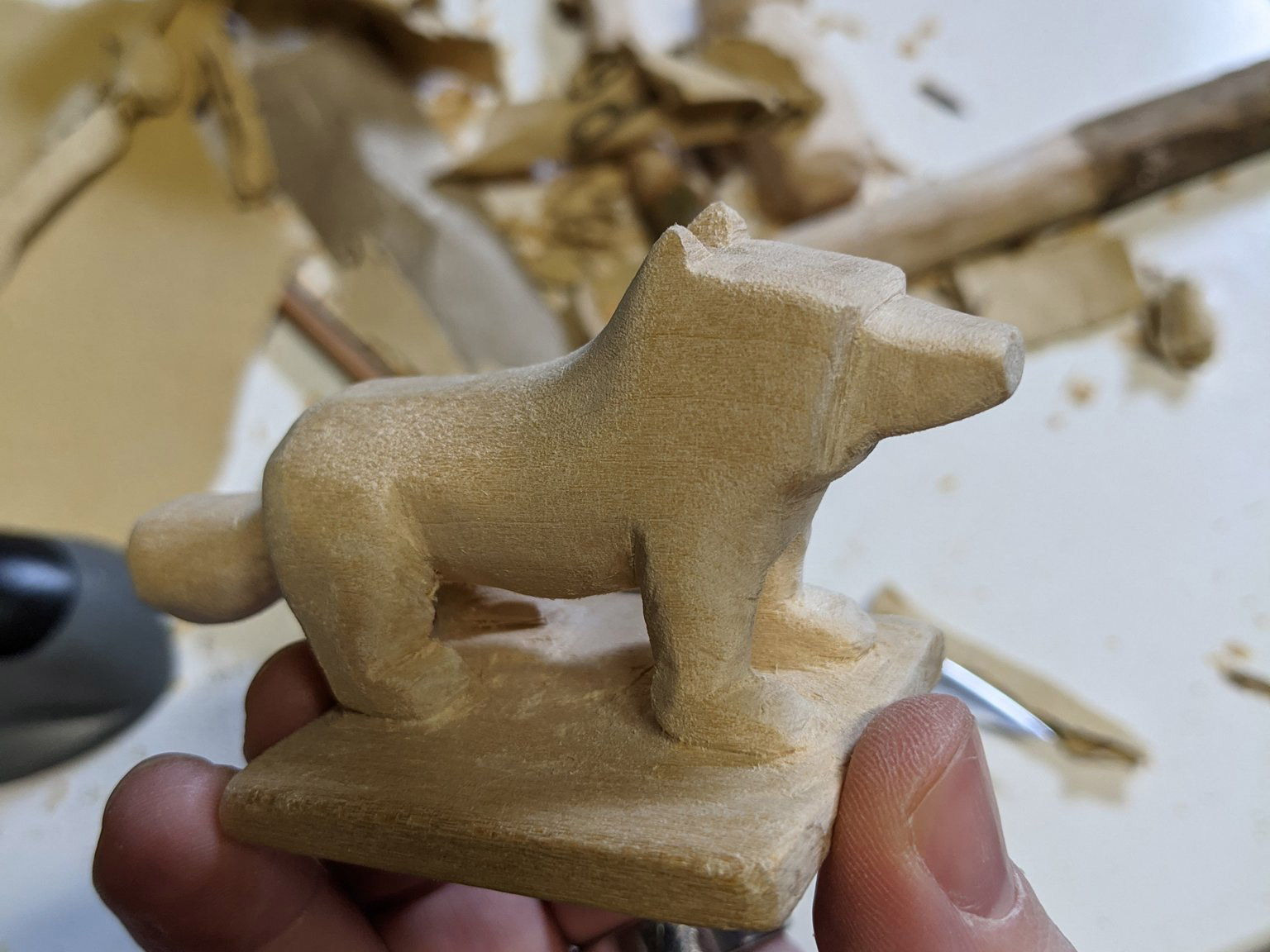 Second phase of sanding done. Started with 60 grit, then 100, then 120. I'm a bit of an obsessive when it comes to sanding and probably don't need to go so far.

Last step is to wax the doggy in bees wax (my ears don't provide enough it would appear). 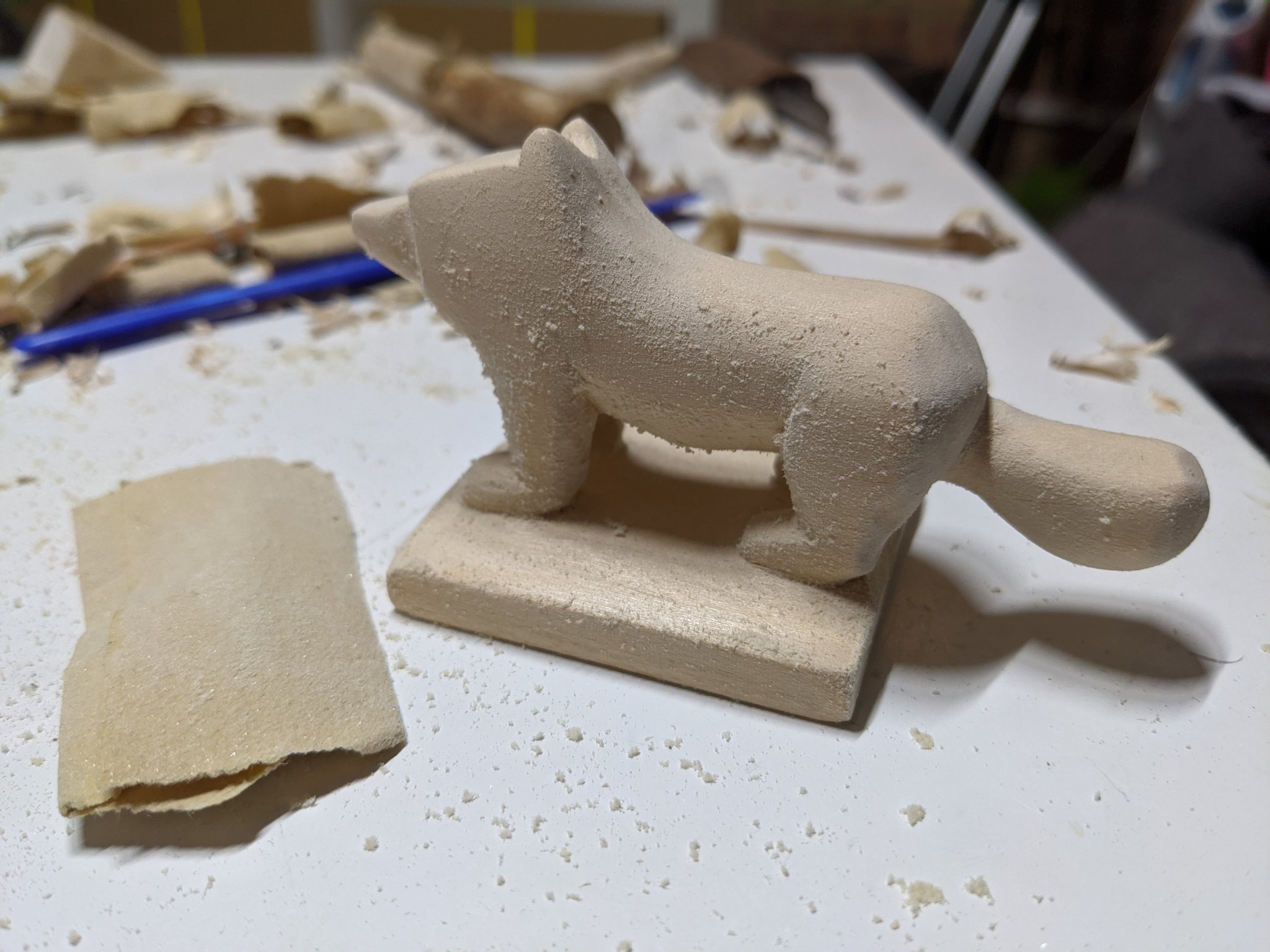 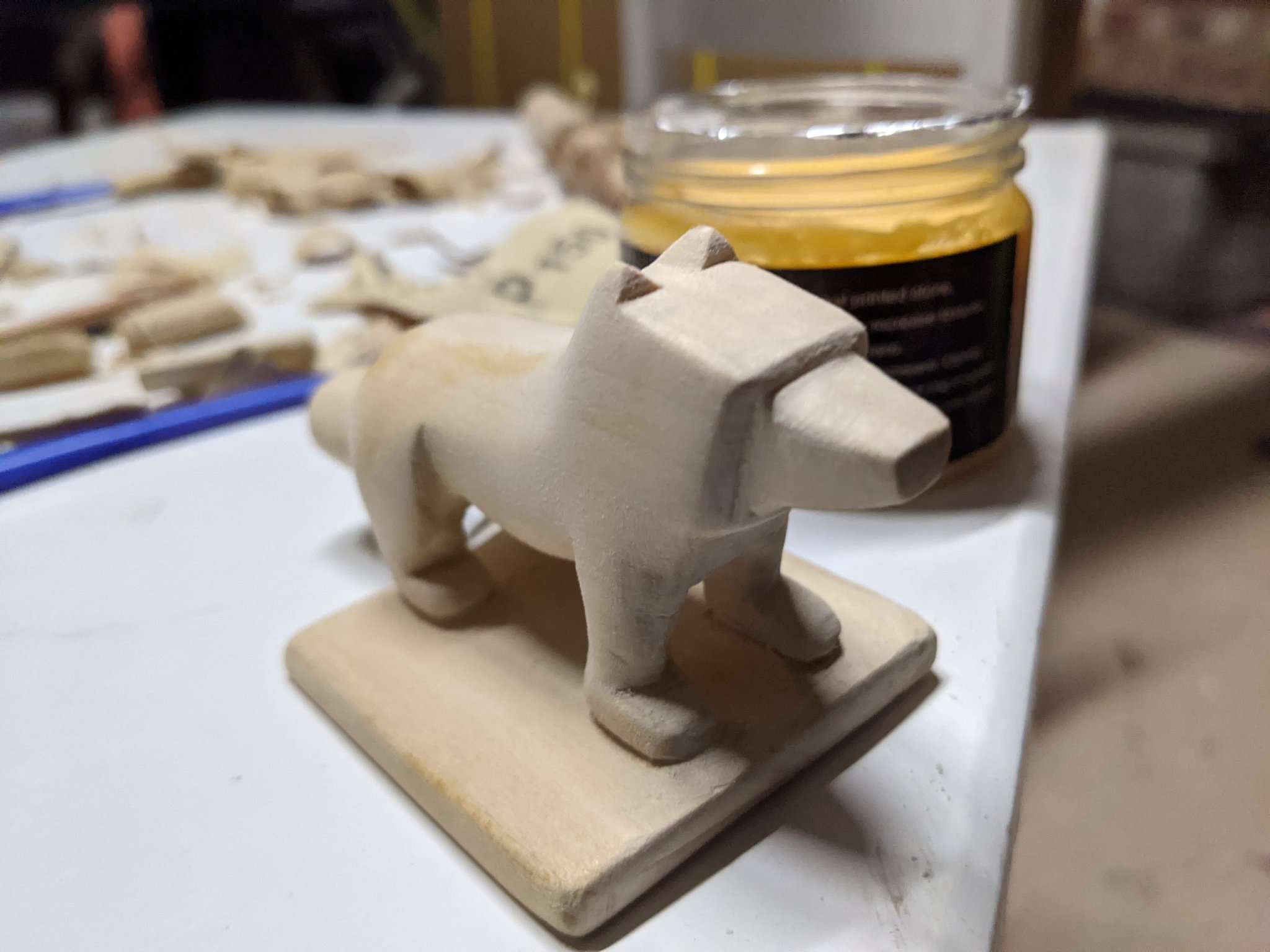 And there's the finished doggy. All buffed with bees wax, standing upright and looking pretty darn good if I say so myself (as a beginner).

Can't quite get over the fact this object started out as a completely solid block of wood. Still kinda baffles me! 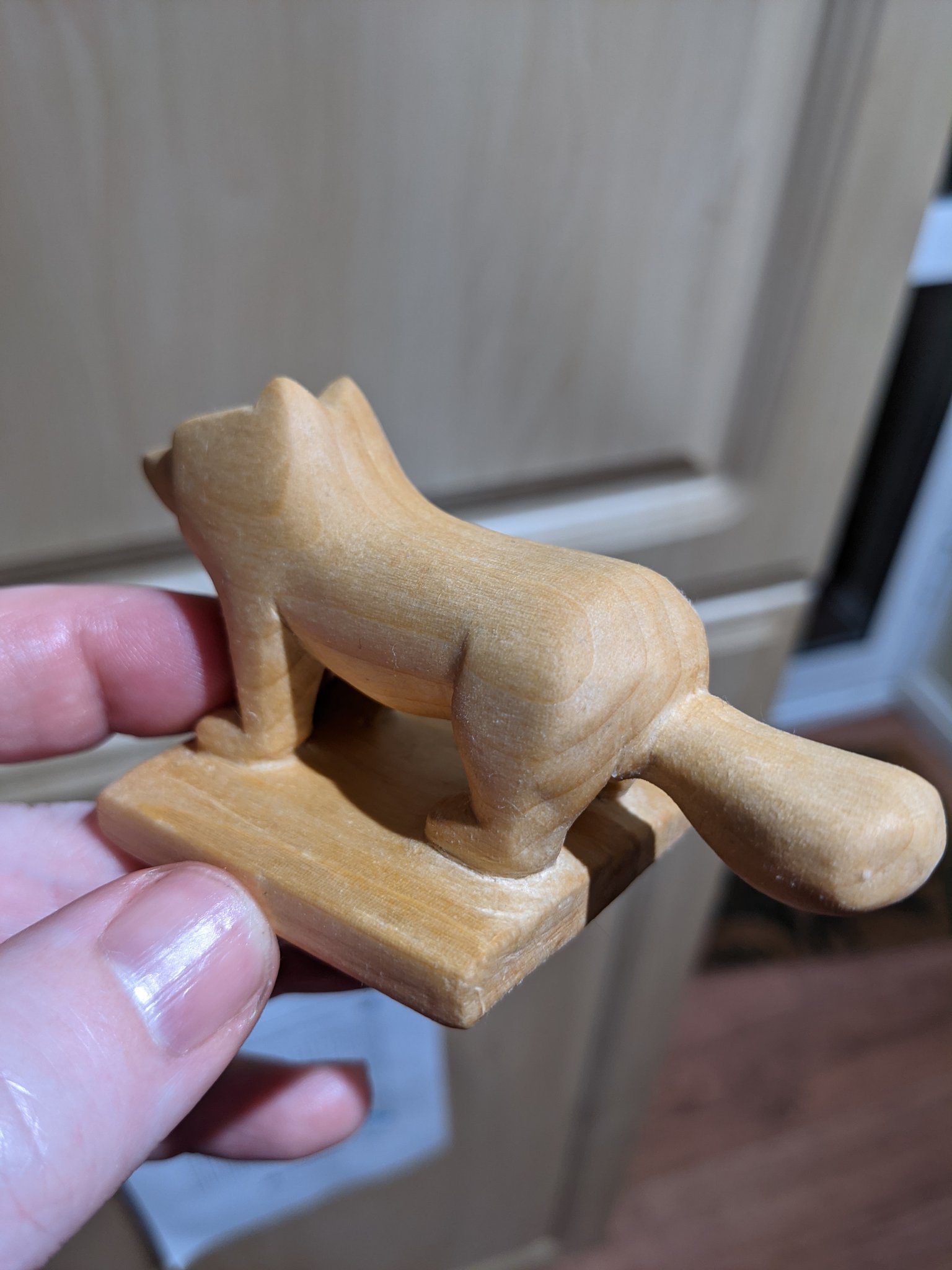 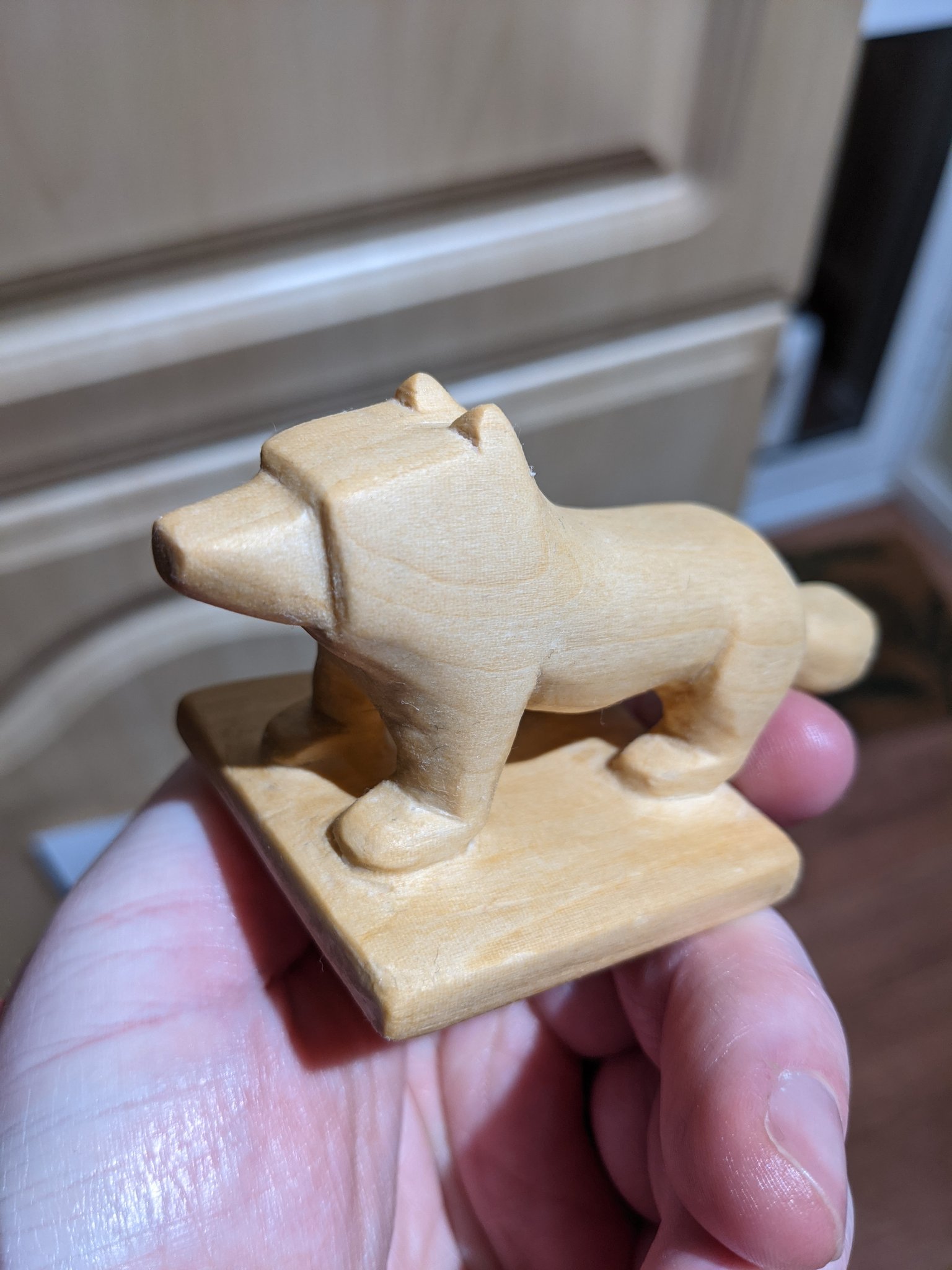 All in all, I rather proud of myself. I honestly didn't think I would be able to get through and under the dog's legs, let along have it look as smooth as it does.

Obviously I can see flaws, but for a first attempt and as a beginner and more importantly as a task that required focus that was not a computer, I think it's kinda great.