ffconf 2019, our eleventh version wrapped up last Friday and it's fair to say that even now as I write, I feel full of love from the people that took part and made the day what it was.

As always, we snapped up a picture of all our amazing attendees, waving their hands in the air, like they just don't care! I love this picture because I've now got 14 of these (11 years + 3 additional days we did from 2016-2018):

Out of all of the organisations that goes in to ffconf, though Julie shoulders the bulk of the work, the curation is entirely for me.

I pride myself on this task, and as each year begins I start to think about what subjects that I care about and want to know more about.

From these core ideas, I then search throughout my extended network to see if I can find these people - after which I will send an invitation, usually reading: "would you be interested in speaking on this [specific] topic…".

Amazingly the vast majority of those people I contact agree. Even though this might be a new talk, or a return to stage after so long away.

We started with Sharon Steed whom I saw earlier on in the year speaking about empathy, and very quickly it dawned on me that a) I personally lack empathy when working in a professional environment, something that I very much wanted to correct, and b) that Sharon's talk was exactly what I needed to open ffconf with.

Next Amina Adewusi addressed the new web developers coming to the industry and shared her own experiences in moving across to the industry and offered advice to those who can help pay forward our own experience - which is exactly what I want to do in my own work. Amina also gets massive props as I accepted her CFP only 5 weeks before the conference started and she delivered a first class talk.

Alice Bartlett gave a brilliantly funny talk on the history and the usage of git - the developer tool. I've long been a fan of Alice, and there have been two subjects that I desperately wanted to shoehorn into ffconf, but just couldn't make work: Alice has a talk on not being able to smell, and she's the founder (or instigator?) of Tampon Club - a superb community project to support some basic needs for women (because Big Corp hasn't cottoned on yet that they should be doing this themselves).

The last talk before lunch was Laura Kalbag on privacy. In the last 12 months I've personally removed both Twitter and Facebook tracking when I had no idea that both existed on my site. Laura's talk goes into the details of how some companies are collecting unfathomable attributes and that even "anonymous data" can be linked to real individuals. Privacy (the lack thereof), surveillance and black hat persuasion are rife on the web right now. Laura gave us dose of reality and some meaty conversations for lunch.

After lunch I had asked Harry Roberts to give a talk, instead on performance, but on how he connects with businesses and shows them how performance is important, and how businesses should value the work. This invitation came about my conversations with Harry and how he conducted his business and I felt that it would be a useful talk for those (like me) who have to approach and potentially pitch that performance is important.

As a complement to the post-lunch performance topics, Anna Migas took up my invitation to dig under the skin of performance and show us all how we can debug and improve. Anna's talk was rife with tips that we could take away on the day.

Then came the final segment of the day, focused heavily on creativity. Charlotte Dann began their talk with an extremely accessible demo of using CSS shapes to create artwork that Charlotte had printed out on paper and hung on the wall of their office. I loved how simple this approach was. Charlotte then went on to show and explain how a series of projects, starting with a combo of Conway's Game of Life, Hexagons and … a third ingredient that I forget - but by the end of the journey the output was a full generative art gold jewellery - from the browser. Incredible.

Then the closing talk of the day: Suz Hinton. We had tried to have Suz at ffconf 2018 but logistics didn't allow. The title I asked her to speak on was Adventures in the Nerdiverse which I do believe Suz may be the reining champion of. Suz's talk was a brilliantly creative smörgåsbord of web capable tech, before turning our attention to ownership and the abuse of big corporations can, and are inflicting on the open communities (this particular case the 900 MHz band that's allocated to amateur radio). Suz was moved to tears and had a lot of us, myself included, on the brinks of tears too, closing with this, something we can all agree the web needs:

The day was fantastic. Thank you all. 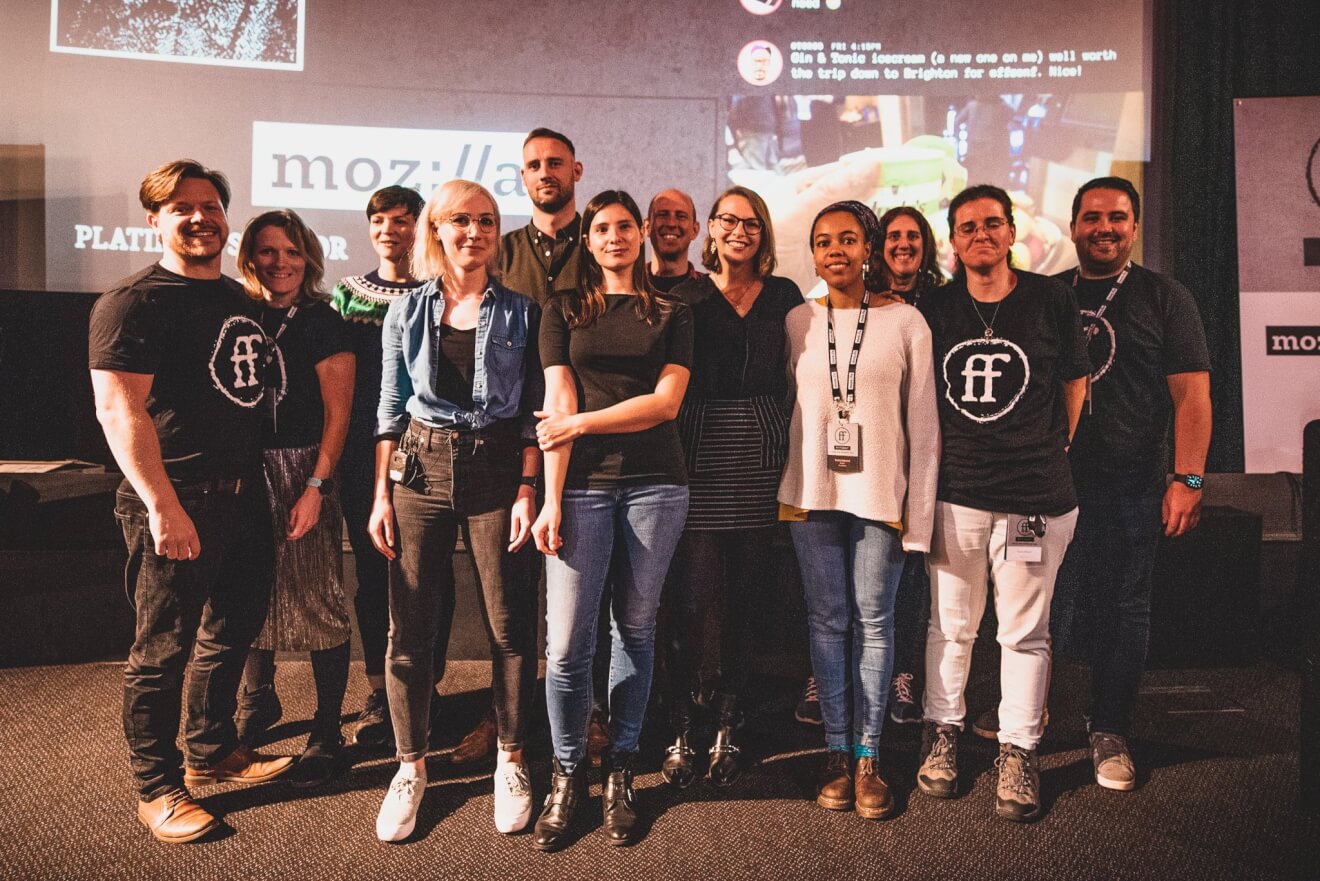