I'm not sure many web developers can get away without visiting the command line. As for me, I've been using the command line since 1997, first at university when I felt both super cool l33t-hacker and simultaneously utterly out of my depth.

Over the years my command line habits have improved and I often search for smarter tools for the jobs I commonly do. With that said, here's my current list of improved CLI tools.

In a number of cases I've aliased the new and improved command line tool over the original (as with cat and ping).

If I want to run the original command, which is sometimes I do need to do, then there's two ways I can do this (I'm on a Mac so your mileage may vary):

cat is used to print the contents of a file, but given more time spent in the command line, features like syntax highlighting come in very handy. I found ccat which offers highlighting then I found bat which has highlighting, paging, line numbers and git integration.

The bat command also allows me to search during output (only if the output is longer than the screen height) using the / key binding (similarly to less searching).

ping is incredibly useful, and probably my goto tool for the "oh crap is X down/does my internet work!!!". But prettyping ("pretty ping" not "pre typing"!) gives ping a really nice output and just makes me feel like the command line is a bit more welcoming.

In the terminal, using ctrl+r will allow you to search backwards through your history. It's a nice trick, albeit a bit fiddly.

The fzf tool is a huge enhancement on ctrl+r. It's a fuzzy search against the terminal history, with a fully interactive preview of the possible matches.

In addition to searching through the history, fzf can also preview and open files, which is what I've done in the video below:

For this preview effect, I created an alias called preview which combines fzf with bat for the preview and a custom key binding to open VS Code:

top is my goto tool for quickly diagnosing why the CPU on the machine is running hard or my fan is whirring. I also use these tools in production. Annoyingly (to me!) top on the Mac is vastly different (and inferior IMHO) to top on linux.

However, htop is an improvement on both regular top and crappy-mac top. Lots of colour coding, keyboard bindings and different views which have helped me in the past to understand which processes belong to which. 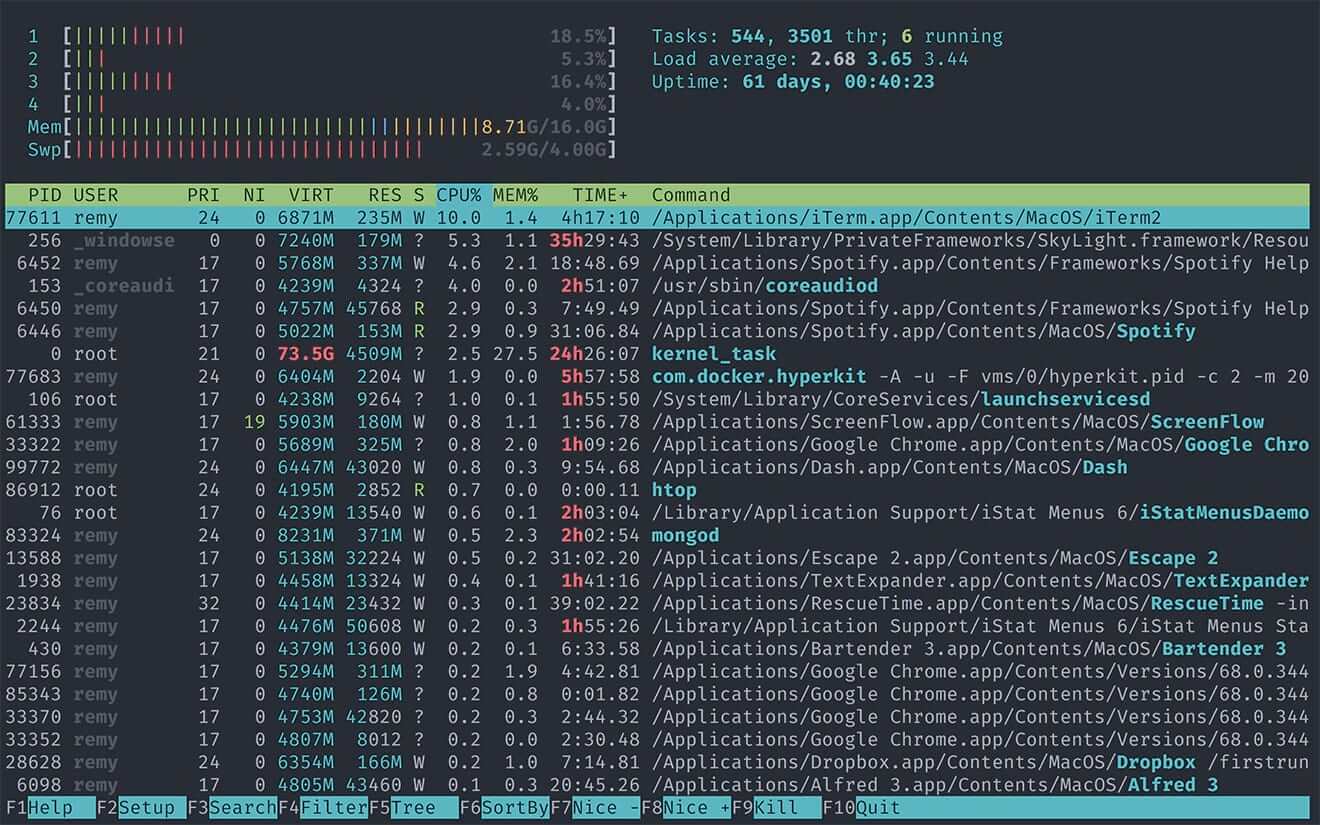 There is a weird bug in Mac Sierra that can be overcome by running htop as root (I can't remember exactly what the bug is, but this alias fixes it - though annoying that I have to enter my password every now and again):

I'm pretty sure I picked this one up from Paul Irish some years ago. Although I rarely fire up diff manually, my git commands use diff all the time. diff-so-fancy gives me both colour coding but also character highlight of changes. 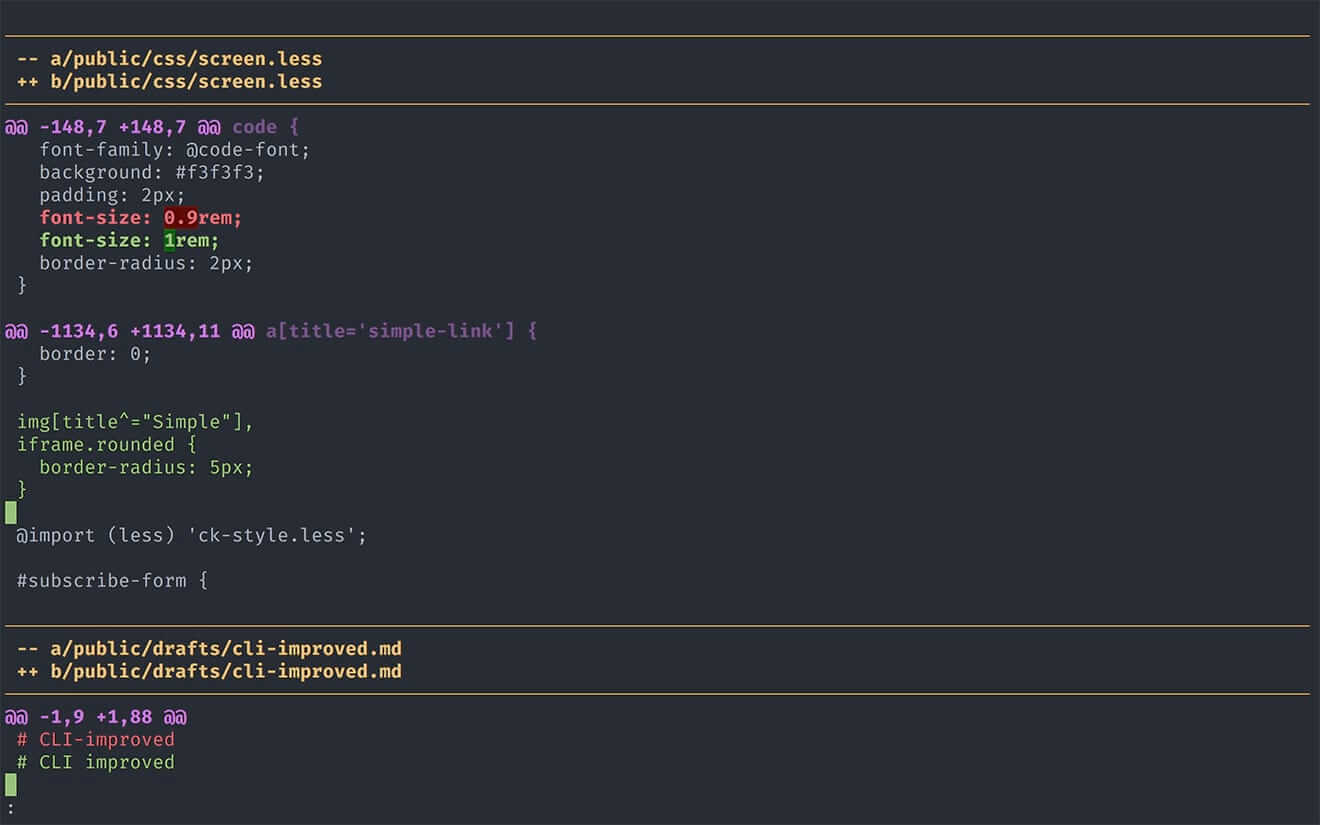 Then in my ~/.gitconfig I have included the following entry to enable diff-so-fancy on git diff and git show:

Although I use a Mac, I've never been a fan of Spotlight (I found it sluggish, hard to remember the keywords, the database update would hammer my CPU and generally useless!). I use Alfred a lot, but even the finder feature doesn't serve me well.

I tend to turn the command line to find files, but find is always a bit of a pain to remember the right expression to find what I want (and indeed the Mac flavour is slightly different non-mac find which adds to frustration).

fd is a great replacement (by the same individual who wrote bat). It is very fast and the common use cases I need to search with are simple to remember. 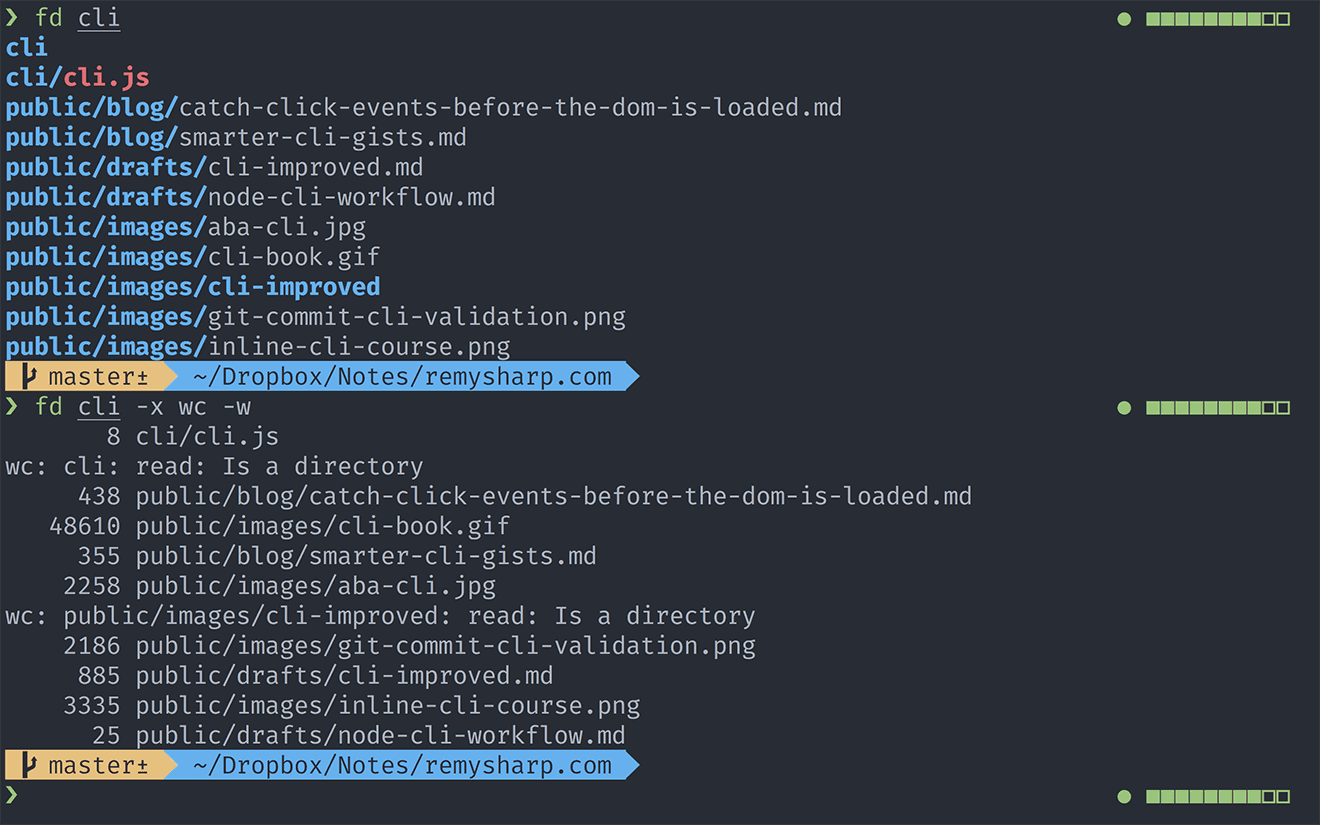 Knowing where disk space is being taking up is a fairly important task for me. I've used the Mac app Disk Daisy but I find that it can be a little slow to actually yield results.

The du -sh command is what I'll use in the terminal (-sh means summary and human readable), but often I'll want to dig into the directories taking up the space.

ncdu is a nice alternative. It offers an interactive interface and allows for quickly scanning which folders or files are responsible for taking up space and it's very quick to navigate. (Though any time I want to scan my entire home directory, it's going to take a long time, regardless of the tool - my directory is about 550gb).

Once I've found a directory I want to manage (to delete, move or compress files), I'll use the cmd + click the pathname at the top of the screen in iTerm2 to launch finder to that directory. 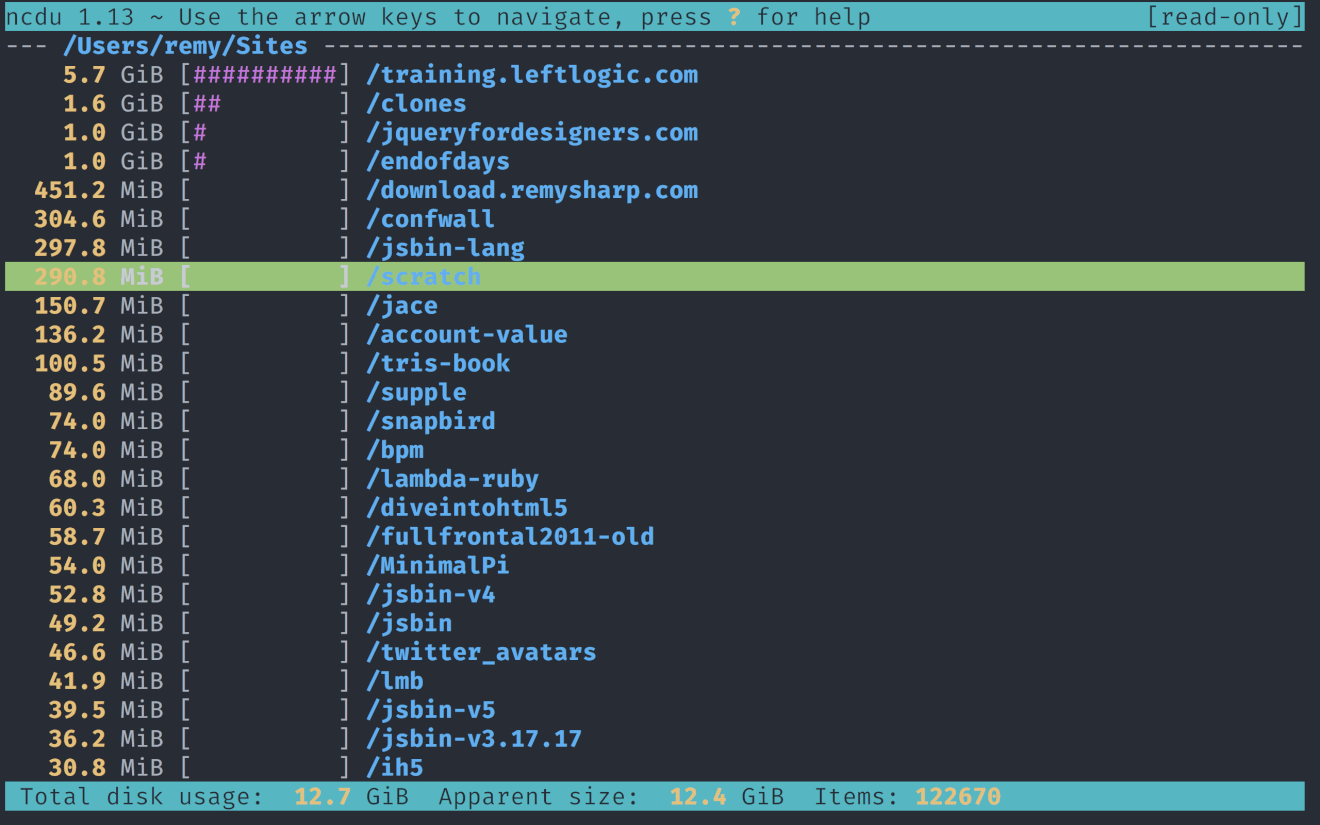 There's another alternative called nnn which offers a slightly nicer interface and although it does file sizes and usage by default, it's actually a fully fledged file manager.

My ncdu is aliased to the following:

It's amazing that nearly every single command line tool comes with a manual via man <command>, but navigating the man output can be sometimes a little confusing, plus it can be daunting given all the technical information that's included in the manual output.

This is where the TL;DR project comes in. It's a community driven documentation system that's available from the command line. So far in my own usage, I've not come across a command that's not been documented, but you can also contribute too. 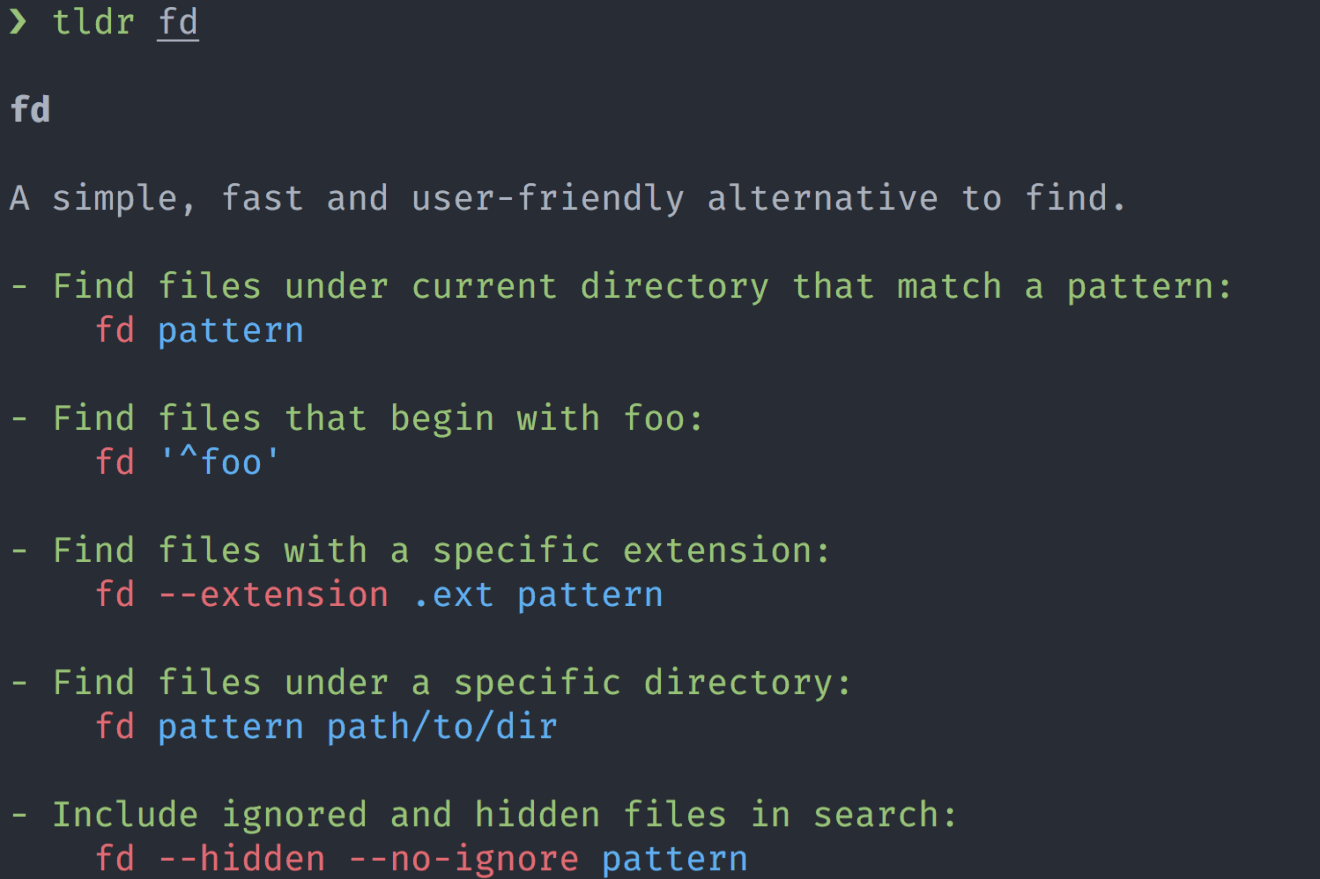 As a nicety, I've also aliased tldr to help (since it's quicker to type!):

grep is no doubt a powerful tool on the command line, but over the years it's been superseded by a number of tools. Two of which are ack and ag.

I personally flitter between ack and ag without really remembering which I prefer (that's to say they're both very good and very similar!). I tend to default to ack only because it rolls of my fingers a little easier. Plus, ack comes with the mega ack --bar argument (I'll let you experiment)!

Both ack and ag will (by default) use a regular expression to search, and extremely pertinent to my work, I can specify the file types to search within using flags like --js or --html (though here ag includes more files in the js filter than ack).

Both tools also support the usual grep options, like -B and -A for before and after context in the grep. 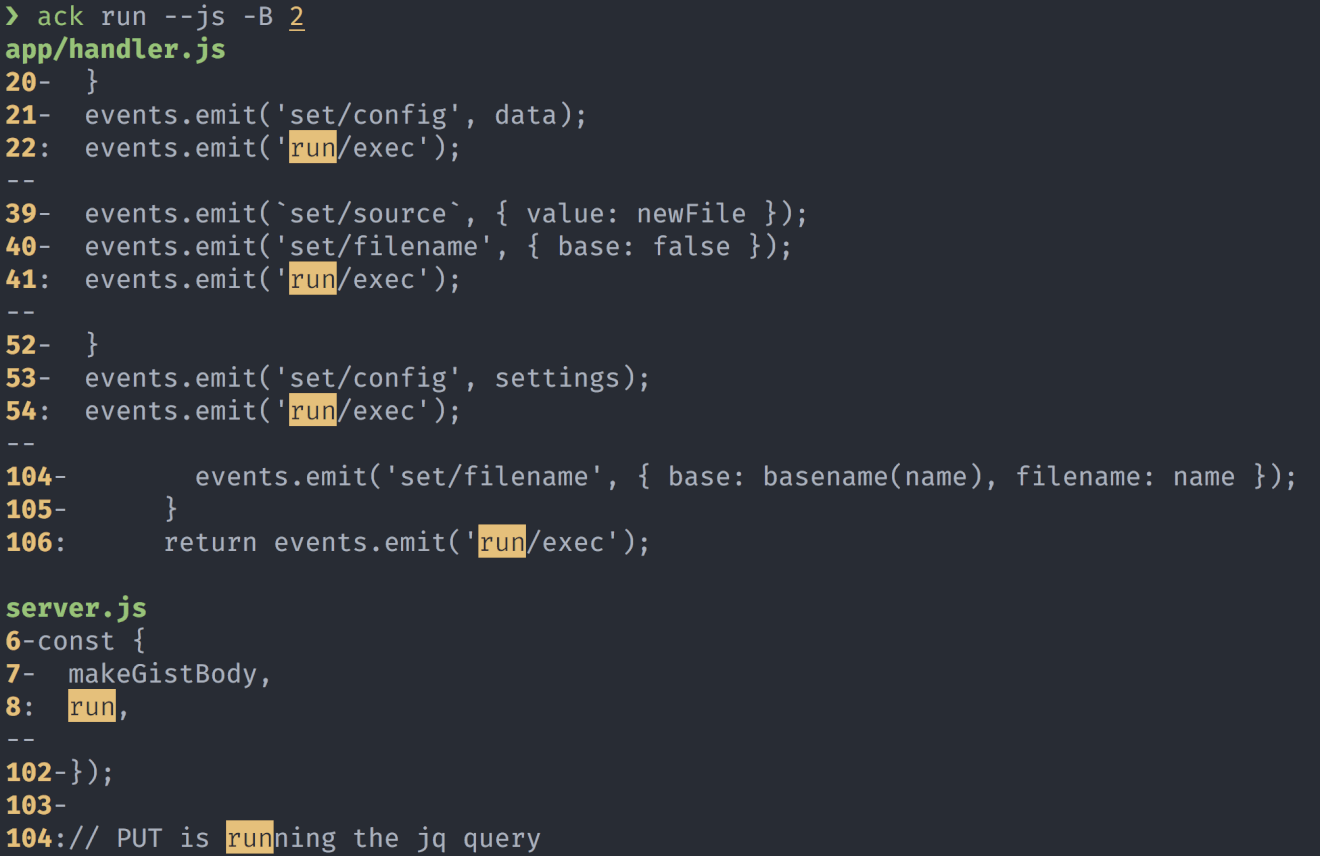 Since ack doesn't come with markdown support (and I write a lot in markdown), I've got this customisation in my ~/.ackrc file:

I'm a massive fanboy of jq. At first I struggled with the syntax, but I've since come around to the query language and use jq on a near daily basis (whereas before I'd either drop into node, use grep or use a tool called json which is very basic in comparison).

I've even started the process of writing a jq tutorial series (2,500 words and counting) and have published a web tool and a native mac app (yet to be released).

jq allows me to pass in JSON and transform the source very easily so that the JSON result fits my requirements. One such example allows me to update all my node dependencies in one command (broken into multiple lines for readability):

The above command will list all the node dependencies that are out of date, and use npm's JSON output format, then transform the source JSON from this:

That result is then fed into the npm install command and voilà, I'm all upgraded (using the sledgehammer approach).

Some of the other tools that I've started poking around with, but haven't used too often (with the exception of ponysay, which appears when I start a new terminal session!):

So that's my list. How about you? What daily command line tools have you improved? I'd love to know.