Safari 3 goes public beta today - so here's a 30 second review of the features and the downsides of the beta upgrade. 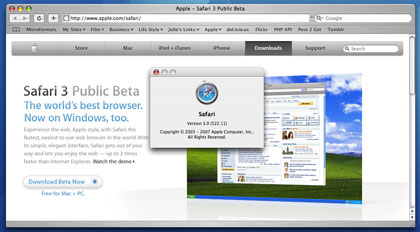 I'm sure there's a few more bits tucked away, and some nice speed improvements (but that would have been available in the Webkit in the first place).

There's some nice little features that makes Safari slicker. For me, the Webkit upgrade and the DOM element inspector are the biggest advantages.

However, the fact that I can't run my SIMBL plugins may cause me to uninstall until October. There's even rumours of ending plugin support entirely in Safari.

The SIMBL plugins do appear to work - and I've since installed the beta version of Safari Tidy and it appears to work fine.