In the next week I'm going to write up my year end blog post which I've done for the last 8 or so years. I find it useful for future self to look back at what I've done over time. As I don't have a paper diary, my blog serves as a digital substitute. I'd encourage you to do the same of you can - it's too easy for the new year to set in and completely forget how much you've already achieved.

Running my own business has allowed me to have a reasonable break over the Christmas period, so obviously I end up in front of the computer 🤔

In last month's newsletter I mentioned Quokka.js and over a few hours on a Sunday evening I managed to hack the same logic into the (new) JS Bin (yes, the one I've been working on for 18 months!).

If you're interested to see how it works, it uses Babel to transform the code to capture intermediate values.

Then, for kicks, I decided to learn about how binary represents floating points and (try) to grok negative numbers. In which I finally learnt all about 2's compliment - and decided to build a little tool for learning more: 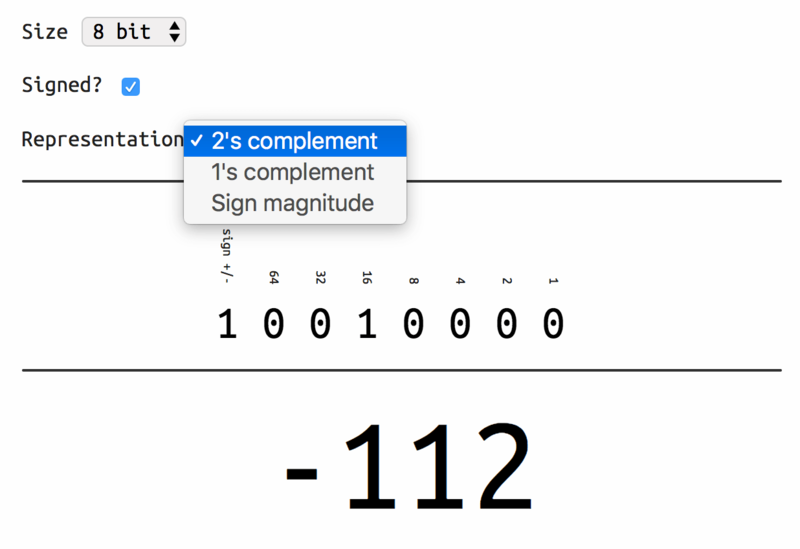 Then from the Bandersnatch Netflix Black Mirror episode (which you should try to watch), I saw the easter egg ending with the "noise", identified right away as Spectrum data, which results in a QR code. So of course, being right up my alley, I decided to dig in.

Using my own code from my Spectrum/making the web slow and loud talk I was able to demodulate the audio into bytes, then viewing those bytes in a hex viewer, I spotted a nested easter egg in the easter egg! Inside the audio is the string "bigger digger bigger bee". Which…isn't that interesting, but fun to dig 😃

Again I've been tinkering on my blog and releasing the random(ish) projects and aiming to explain the hows and whys:

I'm also hoping to write up how the inners of my spectrum / demodulation code works under the hood, so if you're curious, keep an eye out for that in coming weeks.

I thought it might be nice to round up some of my favourite monthly recommends I've come across during 2018 and share them with you.

For a casual fun read, I'd recommend the MurderBot series. Super fresh and totally different from anything I've read before.

If you fancy something interesting, I read War with the Newts and it's quite brilliant. It's the first book I've read that's based in our world, but considers the impact of the story across the entire globe, but not just for the characters, but social impact, economical impact and everything in between. Though it reads a little like a history book, it's a fascinating story.

I'm by far alone in this, but I loved The Greatest Showman - and ended up listening to the soundtrack over and over and over (possibly to my family's frustration!).

If you have Netflix, I'd highly recommend the thriller The Sinner (though there's a second season out, which isn't required watching, but make sure you get the first).

If you've got some BBC iPlayer, then I'd recommend getting on the Luther train - because a new series starts in the new year and Idris Elba brings his magnificent character back to life!

Until next Month, and indeed next year 🎉