For me, I feel like the further through the year we get, the faster it spins by. In fact, this newsletter is now a year old – I'll be singing Christmas tunes in no time!

This month in particular has flown by. I had the great privilege of not only speaking at jsconf.eu, but closing the two day event and it's the 3rd time I've spoken at the EU flavoured edition. I've not spoken publicly in several months - and even then it was fairly sparse and I have to say that I was pretty worried about doing a crappy job.

For jsconf though, I decided that I would try to unlearn the habits that I considered "bad" and went to the web to do some reading. I ended up going through these resources:

I found the last link particularly useful, though it reinforced what I already knew, it gave me something solid to lean against. One other pro-tip I discovered myself: if you want to practise the words for a conference talk outdoors, take your phone, press up against your head, and talk away - looks completely natural! 💪

In the end I was extremely proud of the delivery and felt great afterwards - which is the complete opposite than how I've felt after many other talks. Everything went perfect, and here's a pic of me in front of 1,200 people being overly cocky! 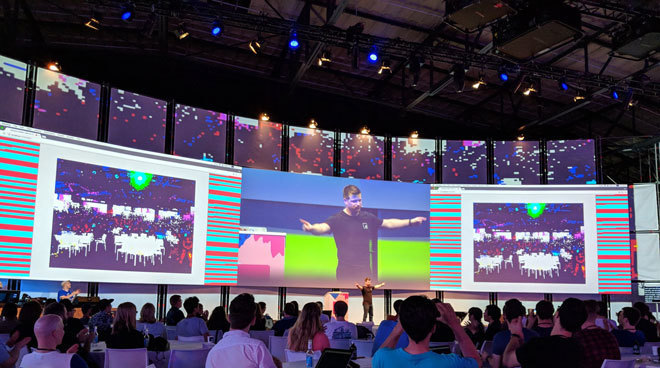 Along with jsconf, I've had three pretty big releases this month:

I'm not a big games player, but I've been playing Human Resources (I played on Android, but it's on iPhone and Steam and some other platforms too) - and I absolutely love it.

It's a puzzle game that you use a limited set of assembly instructions to solve algorithms. What's neat is that you can think of it as assembly (as in real computing) or you can play it just like a regular puzzle game. Super fun, and great for that brain muscle.

Until next month, have a superdooper time.