It's a sad day in the Sharp / Mac camp today. Julie has been driving me to the station each morning since we moved (I'll post about that when I've got the Internet back) - but this morning she had a day off, and rightly I would be walking to the station.

After doing my morning routine, I realised that all our clocks in the flat were out by about 3-4 minutes jeopardising my train catching.

So, out the door I went and down the hill I ran...and Humpty Dumpty had a great fall.

I slipped over about 30 seconds in to my running down the hill.

I don't know whether it's because I snowboard or what, but as I started to fall I twisted to land on my back, keeping my hands and feet up and allowed my body to slide a a little so soften the blow.

Some 3 hours later and I'm feeling my ribs hurt a bit, but that's not the worst of it.

I arrived at work, and peeled open my bag. Slipped out the laptop, and here's what I saw (note that I did not photoshop these!: 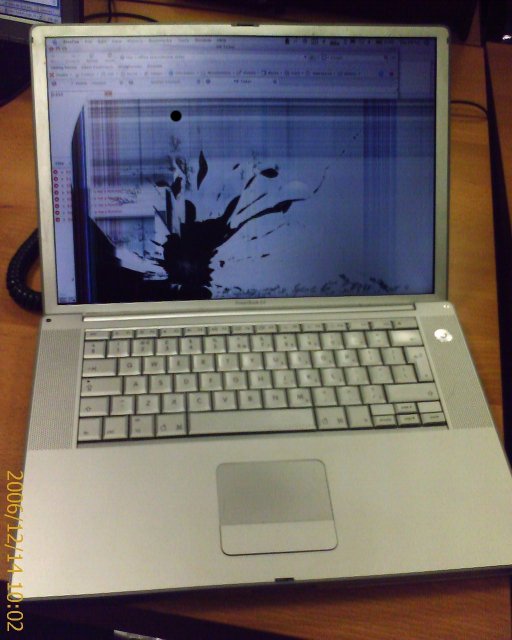 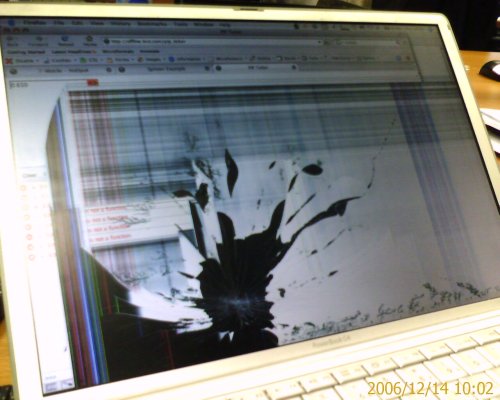 The next step is insurance, but when Julie ordered our insurance, explicitly stating that we need cover for a £2000 laptop, The AA seemed miss it.

She was disputing it with them yesterday (or a few days ago) and they were pulling up the phone logs. Now we're chasing them hard to fix their mistake and get a new laptop.

Damn, if I wasn't so shocked about it all, I'd actually be quite upset!